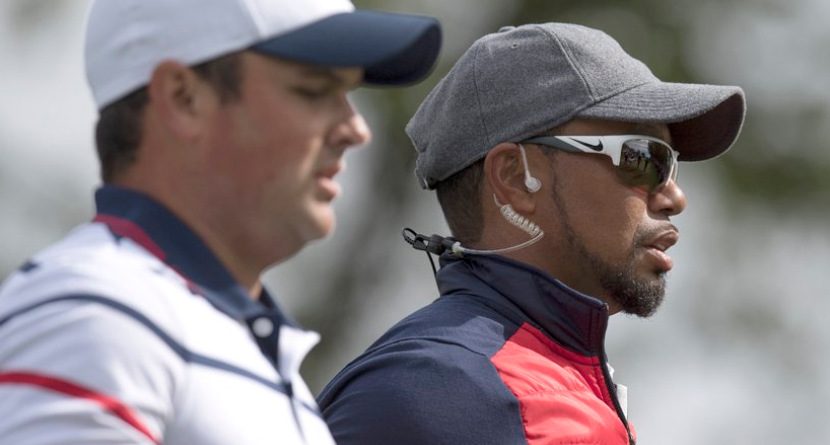 Tiger Woods may not be playing in this year’s Ryder Cup, but that doesn’t mean his presence isn’t felt. In fact for the vice-captain, it’s quite the opposite. Earlier this week, U.S. team member and honorary patriot Patrick Reed wanted to get some more work in at Hazeltine National Golf Club, but the weather wasn’t cooperating. He decided he was going to walk the back nine even if nobody wanted to join him. To Reed’s surprise, Tiger immediately pounced on the opportunity.

“He was like, ‘All right, well, let’s go,’ and he walked it with me,” Reed said Thursday morning. “He helped me figure out the golf course. You don’t get that very often and to have somebody do that for you, especially a guy like Tiger Woods, it meant a lot.”

From Tiger’s perspective, this was a chance to groom a player who appears to care about the only one thing that he’s familiar with…winning.


“Tiger was just kind of watching and seeing how I do my thing,” Reed said. “After two or three holes—he’s played the course before—he’s like, Well, this green slopes this way so if you miss the green, the ball should go there.’ So he throws the balls over there and says, ‘This is where you need to be chipping,’ and that kind of stuff.”

Reed continued, “It’s impressive the way his mind works on the course. It shows why he has won so much. It was amazing. I learned so much, I felt like that nine-hole walk alone could save me so many shots throughout my career just by thinking about the little details. It’s not rocket science. It’s stuff that I should have been thinking about. The experience and expertise he shared with me this week has been awesome.”