Tiger Has Shots And A Limp To Keep Everyone Guessing 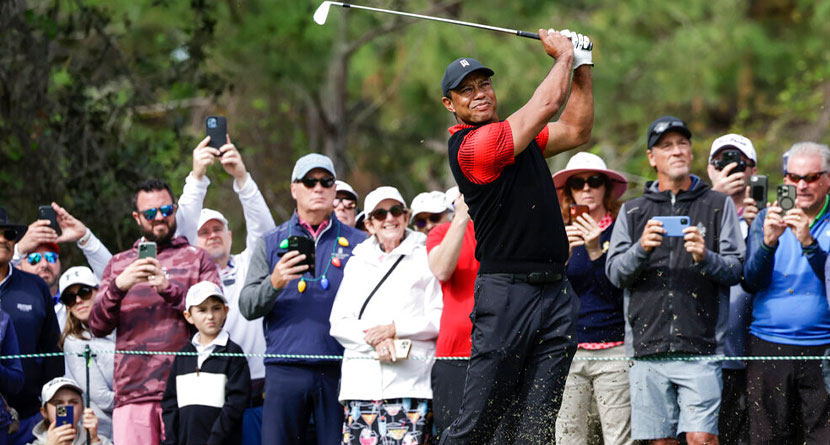 ORLANDO, Fla. (AP) — Tiger Woods relished the two days spent with his son, along with the chance to remind anyone watching he still has game. Some of the shots he hit during the PNC Championship did not belong to a ceremonial golfer.

Woods hasn’t lost his needle, either, as sharp as his short game.


The fifth fairway at the Ritz-Carlton Golf Club Orlando was immaculate — except for a scorecard stuck into the grass next to the tee shot of Justin Thomas, which was some 15 yards behind where Woods had hit his drive.

On the card, a note that Woods wrote in cursive: “You’ve got mail.”

Padraig Harrington broke into laughter when he heard about this. The message takes on different meaning to different people — for the Irishman, it refers to being in a different postal code — but it translates to how far Woods blew it by him.

“You don’t even have to write it down. We all know when somebody does that,” Harrington said. “He was airmailed.”

Small victories? Not really. Woods said in the Bahamas earlier this month, when he was reduced to being only the tournament host because of plantar fasciitis in his right foot, that he could still hit all the shots. The trouble was walking to them.

He was in a cart at the PNC Championship because the PGA Tour Champions runs the event and carts are allowed on the senior circuit. John Daly is about to have knee replacement and took a ride. So did David Duval, playing with a torn muscle in his calf.

“When he’s feeling well, Tiger’s longer than I am with driver. I might be able to hit it farther if I go after one, but consistently he’s hitting it farther than I am right now.” pic.twitter.com/Q11JB8FR7f

The question is when Woods will play next on the PGA Tour. Not even he knows.

A year ago, when he was still recovering from broken bones in his right leg from a car crash in Los Angeles some 10 months earlier, his only hope was to play the British Open at St. Andrews. He wound up playing two other majors, making 2022 a success.

The speculation on his return will start in February for the Genesis Invitational at Riviera and continue until azaleas begin to bloom at Augusta National.

For now, everyone is left with predictions, always a dangerous game involving Woods. Remember, in a span of five years he had four surgeries on his lower back and had to deal with a DUI arrest stemming from a mix of painkillers. And then he won the Masters.

“You’d figure not a chance,” Matt Kuchar said. “He’s proven me wrong on multiple guesses of will he play again, will be win again, all of those. I’ve probably been proven wrong several times, and I’m a guy of the mindset you can never count him out.

Opinions vary widely. Last week alone, Colin Montgomerie doubted Woods could ever win again. He said Woods would have to return to a higher than ever standard of golf to be able to beat players 20 years younger than him and “I don’t see that happening.” A few days later, Harrington said he thought Woods can still win a major.

“There’s not many in the world of golf that could hit that shot — 159 (mph) ball speed, off the fairway with an iron, knowing his irons have quite a bit of loft,” Harrington said. “That’s a very impressive strike.

“There are people hitting 3-irons out on tour who are low 140s ball speed,” he added. “There’s not many people who can do that in the world of golf.”

Given the atmosphere of the PNC Championship — Woods never smiled so wide when playing in the final group and tying for eighth — he was in self-deprecating form.

He was asked Saturday if it was best putting round of the year, a leading question because he had played only nine other rounds, and Woods mentioned all his three-putts at Augusta and St. Andrews. His best shot of the week? “I can tell you a lot of my worst shots,” he replied.

He was reminded of that 3-iron and smiled. “I thought that was a good one, yes,” he said. And then he mentioned the 4-iron into 15 feet on the par-5 14th for eagle on Saturday, followed by the times he ripped driver by Thomas, the 29-year-old PGA champion.

He knows what he can do. Woods mentioned a few text messages he had from friends Saturday night reacting to that 3-iron on the 18th.

“It was basically me rolling the clock back a little bit,” Woods said, still aware that he faces a hopeless race against Father Time.

More confirmation came from his 13-year-old son, Charlie, who for the longest time only knew of his dad’s heroics from video highlights. That changed when Woods contended at Carnoustie in 2018, won at East Lake two months later and then scooped him up into his arms when he won the Masters the following April.

One moment Saturday illustrated why it takes only one appearance for Woods, aging and hobbled, to create so much hope that maybe more is come. He poured in putts 20 feet and 35 feet, and more birdies followed on the next two holes.

Charlie walked over to him and said, “Man, I didn’t know you were this good.” It was a small needle in a haystack of truth.

How good can he still be?

After all these years, all the injuries and surgeries, that’s still to be determined.