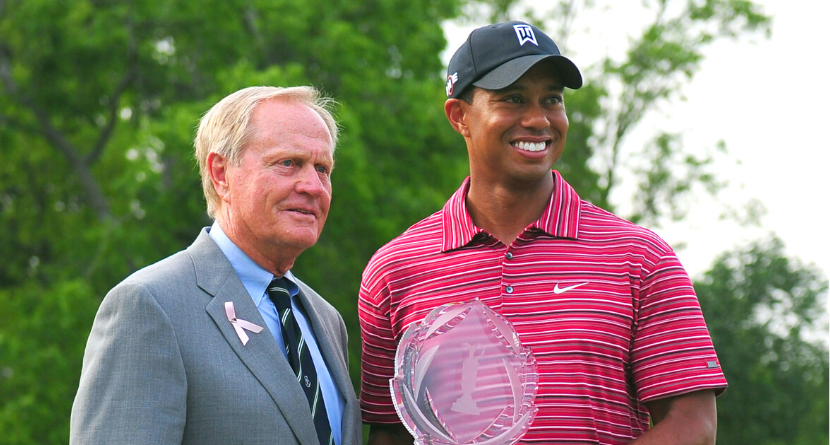 The Masters Champions Dinner has to be on the short list of places at which golf fans would most like to be a fly on the wall. Legendary players clink glasses, swap stories and generally make merry over their membership in such an exclusive club.

Thankfully, in the digital age, a lot of the best gossip has a way of sneaking out of that room. And now, weeks after the news of the spirited Japanese greeting Gary Player gave host Hideki Matsuyama comes this gem: Tiger Woods and Jack Nicklaus discussing the former’s new normal when it comes to playing with pain.

In an appearance on the SiriusXM PGA Tour Radio show “Inside The Ropes” last week, Nicklaus revealed what was said when the two got to talking about Woods’ expectations for his return. It only reaffirms what we’ve long known about the 15-time major champion’s threshold for pain.

“I couldn’t possibly give you any idea what he went through the last 14 months. I think only Tiger could do that,” Nicklaus said. “I’m sure that what he went through was very difficult. Tiger’s a very driven young man with a great work ethic and he’s got a great desire to do the best he can. That’s Tiger. It’s always been Tiger.

Tiger Woods sat next to Jack Nicklaus at the Champions Dinner. Annie Spieth had some gentle advice for Jordan.

Both turned out well, says @dylan_dethier.https://t.co/G0bOpyWfHz

“He said, ‘Well, why in the world would I wait a year to play if I know I’m gonna hurt both years? Why don’t I just get back and start playing and just suck it up?’ Which is basically what he did. I thought his performance was quite good. I mean, I think he wore out on Saturday and Sunday, but I think it was great to have him back in the game.”

There aren’t two golfers on the planet with a better understanding of each other’s unique spot in the universe than Nicklaus, who’s got six green jackets in his closet, and Woods, who has five. So the respect and admiration expressed by Nicklaus is as real as it gets.