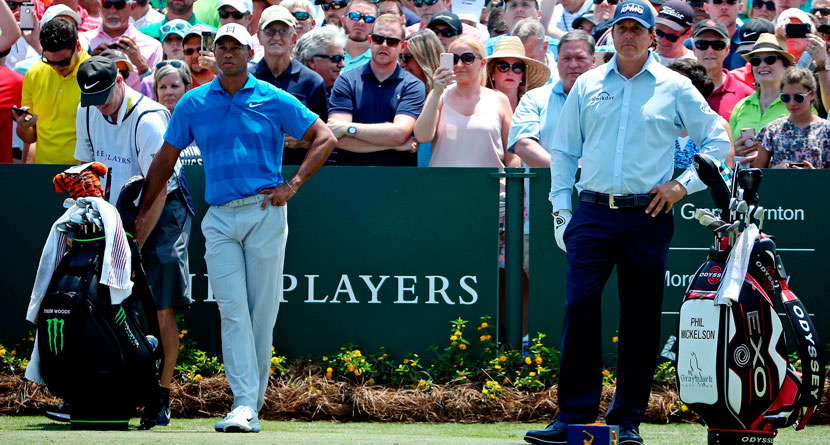 The two biggest stars of this generation, Tiger Woods and Phil Mickelson, were supposed to play a $10 million, winner-take-all match earlier this week, according to Golf.com’s Alan Shipnuck, but plans that included a primetime television special at a Las Vegas course fell through.

“We’re working on a different date,” Mickelson said on Thursday. “I thought it was done for (July) 3rd, but obviously it wasn’t.”

The match, which portends to be the beginning of the next stage of Woods’ and Mickelson’s shared business ventures that would see them play multiple exhibitions, would include mic’d up competitors and likely large prize purses.

“You will hear a lot of the comments that you don’t hear on regular TV,” Mickelson said. “We both like to talk smack, and we both have fun with what we’re doing. And the fact that this isn’t an official tournament, that it’s just a head-to-head match, you’ll hear some of the little nuances, some of the little things that you don’t normally pick up.”

The $10 million purse for the match will not make or break Woods or Mickelson, both of whom have net worths hovering in the hundreds of millions of dollars, but the equivalent to winning a FedEx Cup for an 18-hole match is enough to make their palms sweat, Mickelson said.

“It’s a ridiculous amount of money,” Mickelson said. “No matter how much money you have, this amount will take both of us out of our comfort zone.”

The idea for the match began with some good-natured ribbing through the media at the Players Championship earlier this year when Mickelson and Woods were paired together for the first two rounds of competition. Mickelson broached the topic during his press conference.

“As I look at the cover of the newspaper and the pairing is on there and the excitement that’s been going on around here, it gets me thinking: Why don’t we just bypass all the ancillary stuff of a tournament and just go head-to-head and just have kind of a high-stakes, winner-take-all match,” Mickelson said. “Now, I don’t know if he wants a piece of me, but I just think it would be something that would be really fun for us to do, and I think there would be a lot of interest in it if we just went straight to the final round.”

Woods responded in kind. “Ooh,” he said with a smile when told of Phil’s idea for a high-stakes match. “I’m definitely not against that. We’ll play for whatever makes him uncomfortable.”

Even though the first try at the match didn’t come to pass, there’s reason to be optimistic that a return to the “Shell Wide World Of Golf” or “Battle At” made-for-TV events will be making a comeback with Tiger and Phil driving the bus.