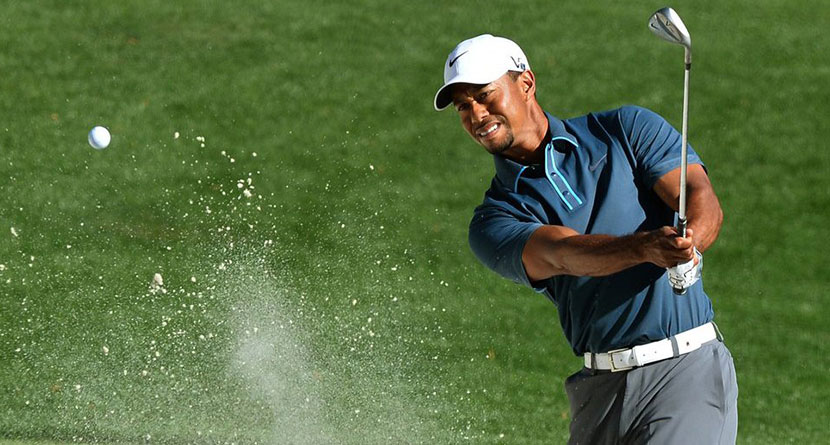 Who knew an 18-man, offseason event the first week of December could cause so much fanfare? This week’s Hero World Challenge has already accomplished that feat and tournament week is just getting underway on Monday. Of course, there’s a reason so many sports fans are fascinated by what is going on in the Bahamas this week, and his name is Tiger Woods.

To be clear on #Tiger equipment: has made no endorsement decisions but for now TM woods, Nike irons, Bridgestone ball, Cameron putter

Woods, now ranked 879th in the world, looks at long last ready to return to competitive golf this week, albeit with some new accouterments. ESPN.com’s Bob Harig caught up with Woods on Sunday at Albany where the 14-time major champion was the only player practicing, and confirmed some rumors that had been swirling about Woods and his equipment make-up.


“I’m not dead,” he quipped. Woods, 40, arrived in the Bahamas on Saturday and played nine holes, then spent some two-and-half hours Sunday on the driving range and in a testing center using a device called TrackMan to gauge various distances and launch angles — a process he said is more daunting now that his longtime sponsor, Nike, is no longer making golf clubs, and Woods has an array of choices.

So many manufacturers sent Woods clubs to try that “my head was spinning.” For now, he is sticking with his Nike irons and experimenting with various woods — it was a TaylorMade driver, 3-wood and 5-wood and Sunday — and he dropped a bit of news when he said he’s using a Bridgestone golf ball this week.

Woods had no trouble carrying drives over 300 yards, shaping shots in both directions with his various clubs while showing no pangs of discomfort. Of course, it’s Sunday, not the opening round on Thursday of an otherwise low-key, 18-player tournament that benefits the Tiger Woods Foundation. It’s a year-ending cash grab for many stars of the game, and how they fare here is of little consequence. There are world ranking points at stake, and a $3.5 million purse with $1 million going to the winner.

Aside from the new sticks in the bag, Woods will have a new sponsor on the outside of it. ESPN.com’s Darren Rovell reported that Woods has inked a deal with Monster Energy to be his primary bag sponsor.

So, if you’re keeping score at home, Tiger has new woods, a new ball, a new putter and a new sponsor. The only question that remains — assuming he puts the tee in the ground Thursday morning — is will he back to his old self?