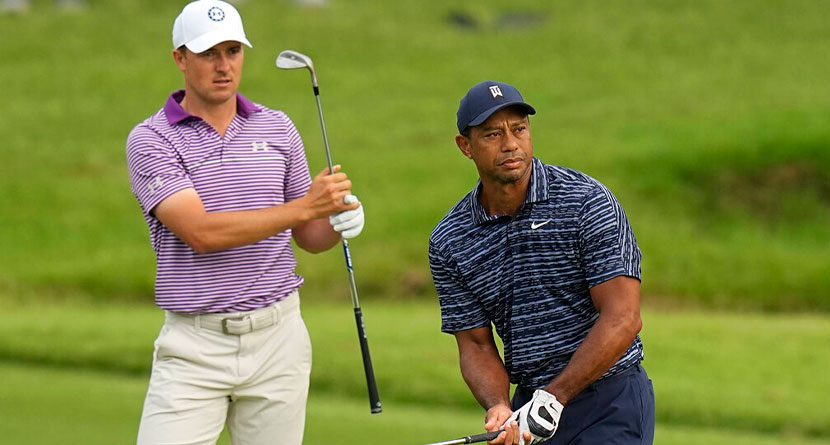 After several days of speculation, the guessing is over and “The Match” is back with the lineup officially confirmed.

As first reported by The Fried Egg, the wildly popular match play event returns for the first time since June featuring four of golf’s biggest names set to do battle.

Tiger Woods and Rory McIlroy will be facing off against Jordan Spieth and Justin Thomas at Pelican Golf Club in Belleair, Florida on December 10th at 6 PM ET.

It’s reported to be 12 holes of better-ball match play under the lights aired on TNT. One can safely assume that Charles Barkley will once again be involved with the broadcast, providing on-course analysis and humor.

Can’t wait to play in Capital One’s: The Match with @McIlroyRory against @JustinThomas34 and @JordanSpieth to raise money for Hurricane Ian relief. See you boys under the lights on December 10th. pic.twitter.com/IdaVY6HGV8

This will be the first Match in six months, dating back to when Aaron Rodgers and Tom Brady outlasted Patrick Mahomes and Josh Allen at Wynn Golf Club in Las Vegas in The Match VI.

This version of golf has risen in popularity since the very first Match in 2018 between Tiger and Phil Mickelson. Adding legends and avid golfers such as Peyton Manning and Steph Curry has allowed The Match to extend past conventional PGA Tour boundaries and reach broader audiences across different pro sports.

Having players mic’d up in a more relaxed environment and being able to hear their dialogue/smack talk is a side of golf that most viewers don’t get in formal tournament play. This heavyweight foursome should provide plenty of fireworks and elite play – plus, fans will be thrilled to see Tiger Woods swinging a golf club again.

The Match is back on December 10. pic.twitter.com/ga7RxEWTVv

Make no mistake, the Match isn’t just about bragging rights. In addition to offering a new and exciting way to enjoy the sport, The Match has raised almost $33 million for charity across its previous six events.

This won’t likely be the last time you see Tiger and Rory joining forces to grow the game. In August, the pair announced the TGL, a new virtual golf league as part of their joint venture, TMRW Sports. In January 2024, there will be six teams of three competing in a regular season consisting of 15 matches and a playoff.

Just last week they released a list of investors including Serena Williams, Josh Allen, Steph Curry, and Lewis Hamilton, among others. Needless to say, the future of golf is looking bright due in part to fresh events like The Match and creative spins on the game like TGL.