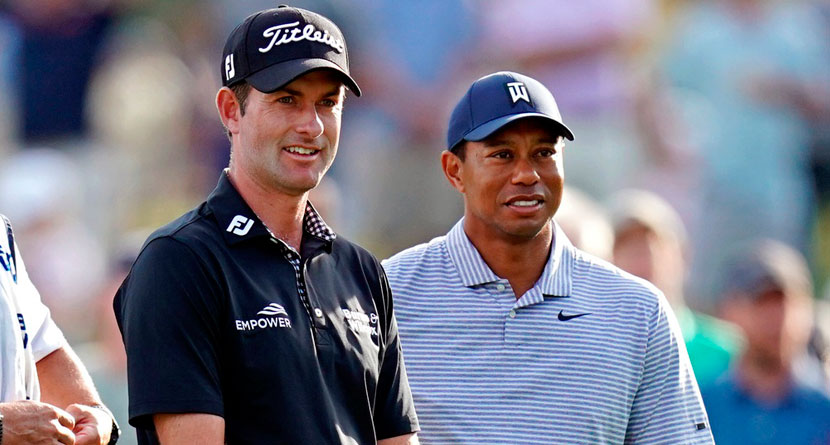 Time is running out to qualify on merit for this coming December’s Presidents Cup teams with only this week’s Wyndham Championship and the three FedEx Cup Playoff events counting towards the point system.

Webb Simpson is doing everything he can to make Captain Tiger Woods’ U.S. top-eight, including lobbying the captain via phone to let him know he’s interested and believes he may have been short-changed in points. Woods, however, wasn’t buying it.


Simpson has finished runner-up in two of his last four events, with his other two results being a T16 at the U.S. Open and a T30 at the Open Championship. That four-week stretch was enough to move him into 10th place on the standings — a good position, but not one that guarantees a spot nor a captain’s selection.

Speaking to the media ahead of this week’s Wyndham, Simpson detailed an exchange he had with Woods following last week’s runner-up finish at the WGC-FedEx St. Jude Invitational.

“It’s a really big goal every year to make the team event,” Simpson said. “If you make a team event, no matter how you think your year has gone, it’s a good thing, it’s saying something good about your game.

“I called Tiger on Monday to talk to him, I thought I was going to move up more (in the standings] and I didn’t, and he told me to ‘play better.’ So that was funny.”

Simpson took that advice to heart and kept up his good play in the first round of the Wyndham, the site of the first of his five PGA Tour wins. Needing to crack the top-eight in the standings, Simpson shot an opening-round 6-under par 64 to sit in a tie for 7th place heading into the second round. Sungjae Im and Byeong-hun An took the first-round lead with a pair of 8-under par 62s around Sedgefield Country Club.

Three weeks to go before these top-8s are locked in for a trip to @Melbourne ?

If the season were to end today, Nos. 9-12 would be Tony Finau, Simpson, Rickie Fowler and Woods.

As Simpson said in his press conference, with the event taking place in December, there’s a lot of time between when the standings close and when the competition begins, which allows a lot of players to throw their hat into the ring for a captain’s pick, so earning his way onto the team is his best bet.