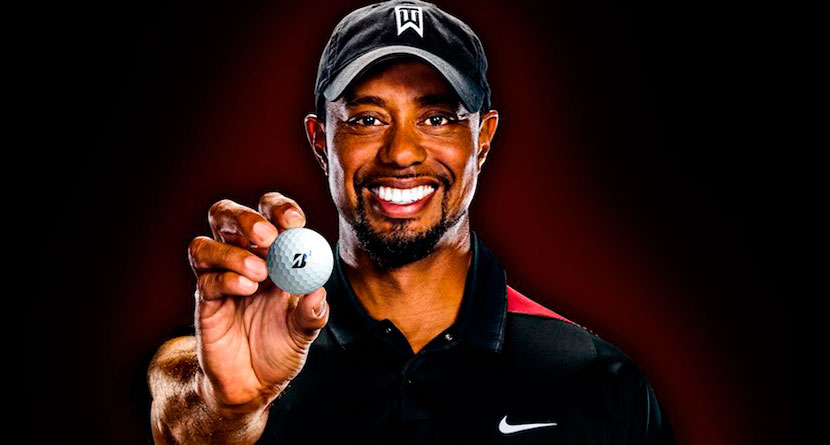 Tiger Woods took the first step in completing the new make-up of his Monster bag following Nike Golf’s exit from the hard goods side of golf equipment by signing a 5-year deal with Bridgestone Golf to play their B330-S golf ball.

Woods played the B330-S during his return to competitive golf earlier this month at the Hero World Challenge. Jonathan Wall of PGATour.com had some more details about Woods’ new ball deal.

Bridgestone Golf announced on Thursday that Woods had agreed to terms on a multi-year deal that will see the 14-time major winner play the company’s golf ball going forward.

“Finding the right golf ball is extremely important. It’s an essential part of my equipment, and the Bridgestone B330-S ball is hands-down the best for my game,” Woods said in a press release. “Controlling launch and trajectory is critical, and with this ball I feel I have total control to hit all shots accurately. I’m not just here to play – I’m here to win, and the innovative breakthroughs of the Bridgestone B330-S ball can help me do that.”

Woods began using Bridgestone’s B330-S ball earlier this month at the Hero World Challenge, marking the first time since 2000 that he’s played something other than a Nike ball in competition.

That smile says it all! We are excited to welcome @TigerWoods to our team! He will be using B330-S! #BestBallEver https://t.co/ZUnwcqtlG6 pic.twitter.com/QJDwQehgwb

Woods, who re-signed with Nike in 2013, was under contract to play Swoosh equipment until the company announced in August that it would no longer produce clubs and balls going forward. Immediately following the news, Woods’ camp reached out to Bridgestone and other manufacturers to get product for him to test in the run-up to his competitive return.

“When the Nike situation happened, [Tiger’s] camp was in contact with us almost immediately,” said Adam Rehberg, Bridgestone’s head of golf ball marketing. “We sent him product and let him test the product and see what he wanted to do and drive the decision of what ball he wanted to play. It was all him when it came to deciding on the B330-S.”

No financial details of the deal were made available.

ESPN.com’s Bob Harig spoke with Woods’ agent, Mark Steinberg, about what went into choosing Bridgestone and where he stood with other possible equipment deals.

“Tiger did a lot of testing, but this is the one that came out to his liking,” said his agent, Mark Steinberg. “It was always about finding out what was best for him and what he liked best before putting together the structure of a deal.”

The Bridgestone ball is the third brand that Tiger has used since turning pro in 1996. He used Titleist balls in the beginning of his career until 2000, when he switched to Nike. Woods will continue to be a Nike ambassador, as he has been for the past 20 years, but the company decided in the fall not to manufacture golf equipment anymore.

As for the other clubs, Steinberg said Tiger was still testing and no decisions had been made. At the Hero World Challenge, Woods used TaylorMade woods (driver, 3-wood, 5-wood) and a set of Nike irons he had played with in the past.