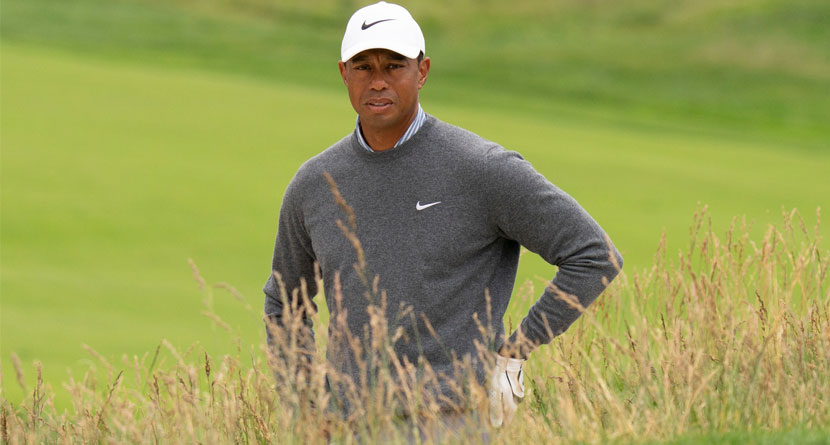 At 43 years old and the veteran of eight surgeries on his knees and back, the modern-day Tiger Woods is going to have more to contend with physically than he ever has before.

And at this week’s U.S. Open, where the temperatures have hovered around the high-50° and low-60° mark, Woods said on Saturday that a stiff neck and achy back can have a negative impact on his performance, but it’s something he’ll have to deal with every shot he plays going forward.

Spotted with some KT tape at the base of his neck during the third round, Tiger was asked after posting an even-par 71 what the reasoning for the tape was and how, if at all, it affects his game.

“When it’s cold like this everything is achy. It’s just part of the deal,” he said. “It’s all the same (aches and pains I dealt with earlier this year). It’s been like that for years. The forces have to go somewhere. And if they’re not in the lower back, they’re in the neck, and if not, they’re in the mid-back and if not they go to the knee. You name it.”

While not divulging too much into the pain he’s feeling, Woods did allow that it’s been affecting his play.

“Yeah, it does (impact my shots,” he said “As I say my back impacts every shot I play, it’s just part of the deal. Let me put it this way, I feel every shot I hit. I think that’s always going to be the place from here going forward.”

While the body wasn’t firing on all cylinders, Woods made it clear that it wasn’t the reason he’s 11 shots back of 54-hole leader Gary Woodland.

“No, I’ve had my chances to post good rounds today, this week,” Woods said. “Today was a perfect example, I fought back and if I was able to clean up my rounds the first two days, I would be closer to the lead than I am now.”

Teeing off in the final round at 2:56 p.m. ET alongside Marc Leishman, Woods will be 2:30 ahead of the leaders and hopes to post a score that will have them thinking.

“I think I still have a chance” pic.twitter.com/GfLBuCxPfe