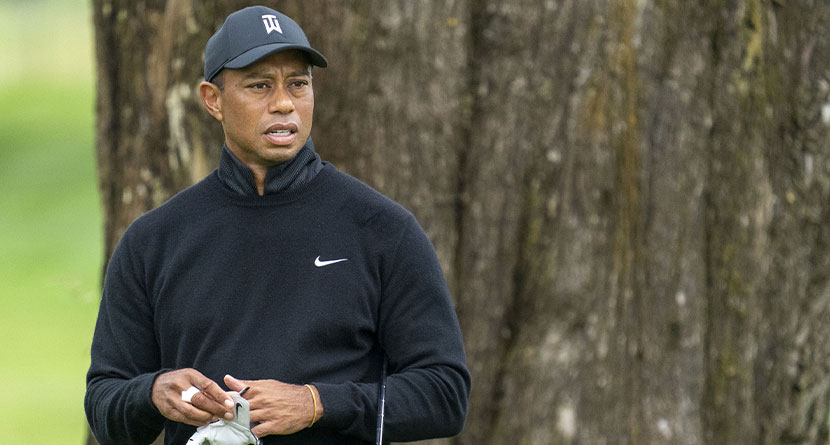 For the first time in three months, Tiger Woods answered questions asked by someone other than his management team.

Speaking to Daniel Rapaport of Golf Digest, Woods gave some insight into the road he faces ahead, how this rehab differs from some of his past injuries and what his short and long-term goals are.

Requiring multiple surgeries to repair comminuted open fractures to both his tibia and fibula bones in his right leg, Woods spent about three weeks in Los Angeles-area hospitals following his Feb. 23rd single-car rollover crash. Heading home to South Florida in mid-March, status updates on the 15-time major champion have been few and far between.

In fact, the only semblance of an update from Team Tiger was an April 23 photo posted to his social media accounts alongside his dog, Bugs, saying that his backyard golf course renovation was coming along faster than his recovery.

“It’s funny because in that photo, the crutches definitely make my shoulders look big!” Woods said. “Maybe it’s the workouts, too. It’s been nice having the ability to still stay strong and work out my upper body.”

On Thursday, he shared some more details with Rapaport and Digest.

“This has been an entirely different animal,” Woods said. “I understand more of the rehab processes because of my past injuries, but this was more painful than anything I have ever experienced.”

That’s saying something who has had five back procedures and five more on his left knee alone.

While rehabbing can be an ardous and lonely process, a handful of his peers on the PGA Tour have stopped by his Jupiter, Flordia home to check in on him, including Justin Thomas, Rickie Fowler and Rory McIlroy, among others.

“I’m happy and I hope he’s happy, and I always appreciate his help,” Thomas said. “If you would have told us when we were 15, 20 years old that Tiger Woods was texting us the night before we have a chance to win the tournament trying to inspire us, that’s pretty cool.”

Woods said that the support isn’t something he takes for granted.

“It’s been incredible,” Woods said. “I have had so much support from people both inside and outside of golf which means so much to me and has helped tremendously.”

Perhaps furthest from Woods’ mind, but near the front of many golf fans’ minds is a simple question: if and when can fans expect to see Tiger playing golf again?

Woods declined to comment on his golf future, instead opting to focus on more pressing near-term goals.

“My physical therapy has been keeping me busy,” he said. “I do my routines every day and am focused on my No. 1 goal right now: walking on my own. Taking it one step at a time.”