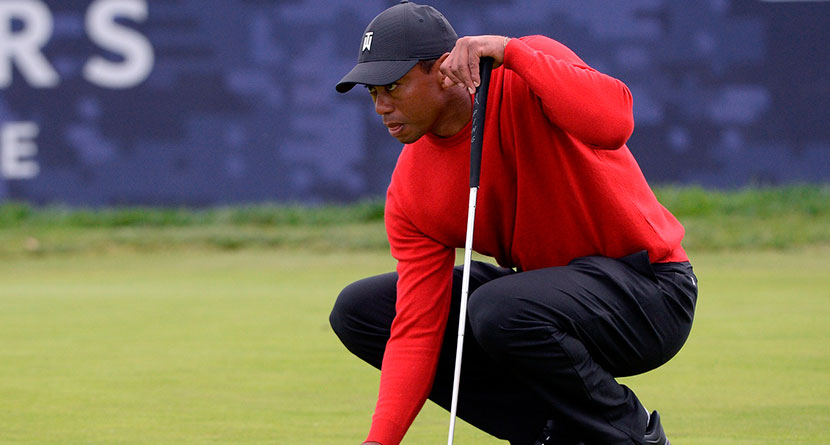 Tiger Woods’ quest for 83 PGA Tour wins continues after a week of hosting at the Genesis Invitational coupled with a stiff back led to a disappointing weekend that left Woods at the bottom of the leaderboard among those who made the cut.

Back-to-back rounds in the mid-to-high 70s had Woods tapping in on the 9th green, his last of the round, on Sunday while the drama of the tournament proper was unraveling on the back nine at Riviera Country Club.

One of Woods’ worst 72-hole performances of his career was encapsulated on the 13th green, his fourth hole of the day, on Saturday. Proclaiming that he needed to get off to a good start in the third round to inject himself back into the proceedings, Woods went par-bogey on holes No. 10 and 11, two of the four easiest holes by scoring average on the day.


After a routine par on the tough 12th, Woods gave himself a look to get back to even par for the day on the par-4 13th hole, leaving himself 18 feet for birdie. Then he four-putted.

The second 4-putt in two weeks for Tiger.

The last time he had multiple 4-putts in a season was 1998. pic.twitter.com/W4kEXpdWHG

The double-bogey was part of a 5-over par 41 on the back nine, which led to him posting a score of 76 in round three. The gaffe on the greens marks Woods’ second four-putt in as many events.

Not much went better on Sunday as Woods’ signature red shirt and his massive crowds were on the wrong side of the golf course as Adam Scott marched to victory.

“I did not do much well today,” Woods said after his final round. “Good news: I hit every ball forward, not backward, a couple sideways. But overall, I’m done.”

Woods’ score of 295, 11 over-par, was his worst 72-hole score at the Genesis Invitational and the second-worst 72-hole finish of his career, bested — worsted? — only by his last-place finish at the 2015 Memorial where he shot a third-round 85.

“I was just off. It happens,” he said. “I’m off, and I got a chance to have the week off this week and do a little prep, a little practicing, some training, be at home and all positive things.”

Woods won’t play in this coming week’s WGC-Mexico Championship, a puzzling decision when it was made on Friday, but one that seemed to portend how Woods was feeling before his weekend on the course went off the rails.

Congratulations to @adamscott on winning @thegenesisinv. Thank you to my wonderful @TGRLiveEvents staff and to each player and fan who helped support this year’s event, benefitting @tgrfound. pic.twitter.com/oqo7eYcZAK

Woods said the decision to skip Mexico was made in part because of his long-stated goal to peak around the first major of the year, and given his multiple duties as a competitor and host this week, he didn’t feel he’d be ready to compete this week at Club de Golf Chapultepec.

“Well, the idea is to peak around Augusta time,” Woods said. “I just felt I wasn’t going to be ready for next week, a little rundown and playing at altitude as well isn’t going to help that, so take the week off.”

Next up for Tiger is the Florida swing with a decision to be made as to whether he’ll play the Honda Classic, the Arnold Palmer Invitational or both prior to the Players Championship.

After The Players, Woods will likely have a week off before playing in the WGC-Match Play, then take another week off before driving down Magnolia Lane for his title defense.