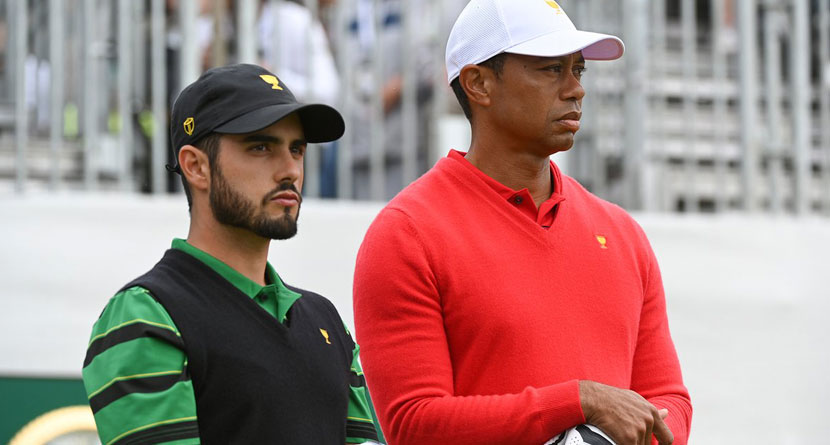 When golf fans think of a “chip-on-the-shoulder” pro, Brooks Koepka is the flavor of the month, but Tiger Woods reminded everyone this week at the Presidents Cup that he is the godfather of perceived slights.

In the unique position of being a playing captain, Woods more or less had his pick of the International Team litter when it came to choosing his opponent for Sunday singles at Royal Melbourne, and when International captain Ernie Els offered up rookie Abraham Ancer first, Woods saw an opportunity.

First out for the United States would be Woods himself.

“I would like to play against Tiger (Woods),” Ancer said. “But the truth is that our objective is to do everything we can to win. Winning a match in the singles would be very special, so we need to try to get the cup.”

Abraham Ancer is set to make his @PresidentsCup ? debut next month, and he’s hoping for a duel with ?

“I would like to play against Tiger (Woods).” https://t.co/V6ovVaoYWK pic.twitter.com/pGYhJoURlc

The comments gained traction despite Ancer lacking any vitriol in his answer, but that was enough to catch Woods’ attention, which is not something you want to do.

After a back-and-forth beginning to their match, Woods started to put some distance between Ancer and himself around the turn winning both Nos. 9 and 10. Ancer was able to pick up a hole on No. 13, but Woods responded by winning the next two holes, capping it off with a walk-off birdie putt on 16 to win 3 & 2.

“Well, when (the putt) was about probably like six feet out, the match was over,” Woods told Golf Channel’s Steve Sands after he finished off Ancer. “I might have taken the hat off a little bit early, but it was over.”

He expounded on his match with Ancer after his team completed their 10-8 comeback to win the Presidents Cup 16-14 to secure the American’s 11th victory in the competition.

“I hit it well this week,” Woods said about his week as a player. “I was responsible for three points, JT and I went and got two, and I happened to play well and got Abe today.

Given the last little dig, Woods was asked if Ancer’s comments had come across his radar, Woods smiled and said, “Yes. Next (question.).”

As for Ancer, he clarified his statement in the aftermath of the matches.

“First of all, that question was in Spanish, so the tone when I said it, it was never like cocky or challenging or anything like that,” he said, according to GolfChannel.com. “At the moment I thought it would be a great experience, which it was. No matter what, with the outcomes of that match, I would have gained a lot.”

The moral of the story: be careful what you wish for when it comes to challenging Tiger Woods, even if you didn’t mean it as a challenge.