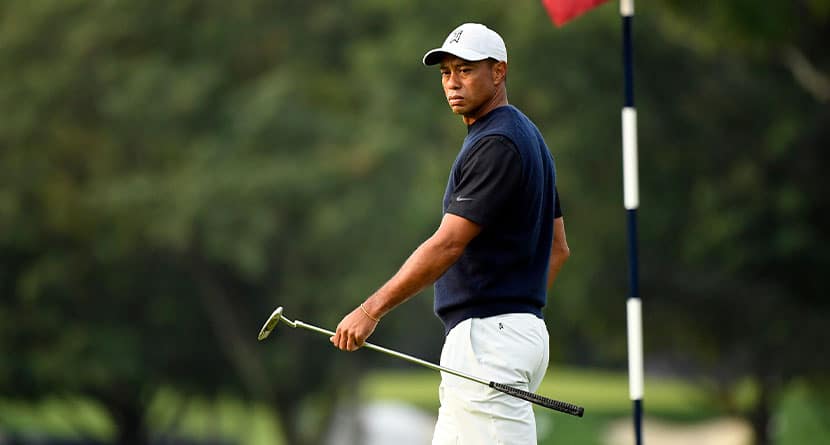 Tiger Woods announced on Tuesday afternoon that he had recently undergone yet another back surgery, a microdiscectomy, his fourth of that kind and his fifth back surgery since 2014.

The statement, released just after 4:30 p.m. EST, revealed that Woods had begun feeling discomfort in his back following the PNC Championship, in which he and his son Charlie finished in a tie for seventh place.

“Tiger has recently undergone a microdiscectomy procedure to remove a pressurized disc fragment that was pinching his nerve after experiencing discomfort following the PNC Championship,” the statement said. “His doctors and their team have determined it to be successful and expect him to make a full recovery.”

The announcement comes just a week before The Farmers Insurance Open, an event Woods regularly competes in to begin his schedule when healthy. He also said that he will not be ready to play at The Genesis Invitational in Feburary, which benefits his foundation and where he also acts as a tournament host.

“I look forward to begin training and am focused on getting back on Tour,” Woods said in the statement.

As it turns out, even as the statement was making its way to golf fans around the world, longtime friend and Golf Channel analyst Notah Begay revealed that Woods’ on-course work had already begun.

“I just exchanged texts with him a little while ago and he’s doing great,” Begay told Golfweek.com’s Steve Dimeglio. “He was out on the course hitting golf balls. He wasn’t ripping drivers. He was just getting a feel for the game after the surgery and seeing just how everything is.”

Begay said Woods’ swing speed had dipped below 115 MPH in 2020, the slowest its been in 30 years, partially due to old age, but also having to do with consistent nerve pain.

“It was like the first time in 30 years that he swung that slow,” Begay said. “And that was due to a lot of factors. Old age was one of them. But having nerve pain in your body is going to prevent you into putting everything you can into the swing. This surgery relieved a lot of discomfort.”

Halfway around the world in Abu Dhabi, Rory McIlroy added some context to Woods’ surgery as well ahead of the European Tour’s 2021 debut event.

McIlroy said Woods had the surgery on Dec. 23 and was “back on his feet the next day,” according to GolfChannel.com’s Ryan Lavner.

“In his words, it was a small procedure,” McIlroy said. “Obviously, any time you’re being cut into you try to avoid that as much as you can. But he was on back on his feet the next day, so I don’t think we can read too much into it. I think they were just trying to clean a couple bits up.

“Obviously he won’t be playing for the next couple of months, but he should be back for the Masters, if not before that. I think he’ll be just fine.”

Woods underwent his first microdiscectomy surgery in March 2014, then had two similar procedures in the fall of 2015. In April of 2017, he had an anterior lumbar interbody fusion surgery.