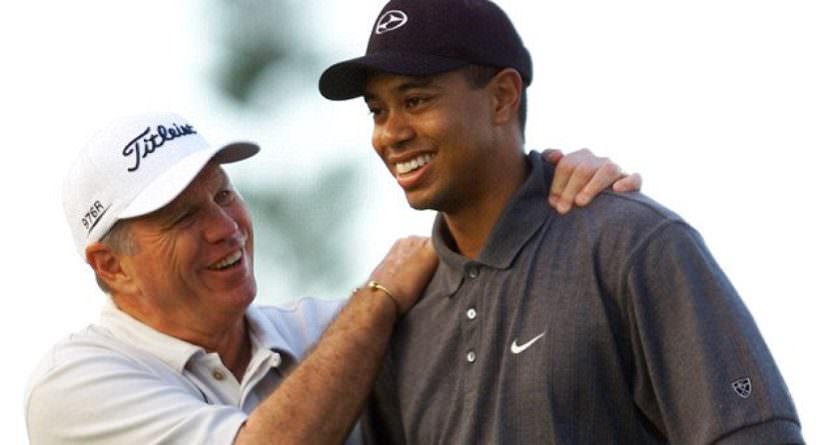 With Tiger’s latest WD in Dubai, everybody is asking the same question: is he done? It sounds extreme but the reality is that the 79-time PGA Tour winner is also 41 years-old coming off multiple back surgeries. While some of what we saw over the past few weeks can be loosely attributed to rust from not playing competitively in 16+ months, the majority is incredibly concerning.

In a recent interview with Sky Sports, Woods’ former coach Butch Harmon, who he’s won eight major titles with, was asked if Tiger can ever regain the form we saw in his heyday:

I’d like to say yes, but it doesn’t seem likely at the moment. Tiger is 41 years old, he’s had three back surgeries and four knee surgeries, and the young kids on Tour right now are playing better and better.

I’d like to see him healthy and competing again, but watching him last week and in the first round in Dubai, you can clearly see how much slower his body is through the ball. It was almost like he just couldn’t get through it.

Are we ever going to see him playing at the heights he did back in the early 2000s? Probably not, but the main thing he has to do right now is somehow get himself healthy. He’s been off for almost a year and a half, and now he’s come back but he still can’t finish a tournament. To me, that’s not a good sign.

We all want to see him playing well again, but right now I’m concerned that someone I have admired for so long, and who I believe is the best player who ever lived, might not be able to play at any kind of level again.

Hard not to agree with Butch https://t.co/NgNIBN77hJ

As expected, it’s almost delusional at this point to believe Tiger is anywhere near the same player as he was when he won the Tiger-slam. At this point, all we can do is to hope he gets healthy and is able to make it to a weekend in 2017.