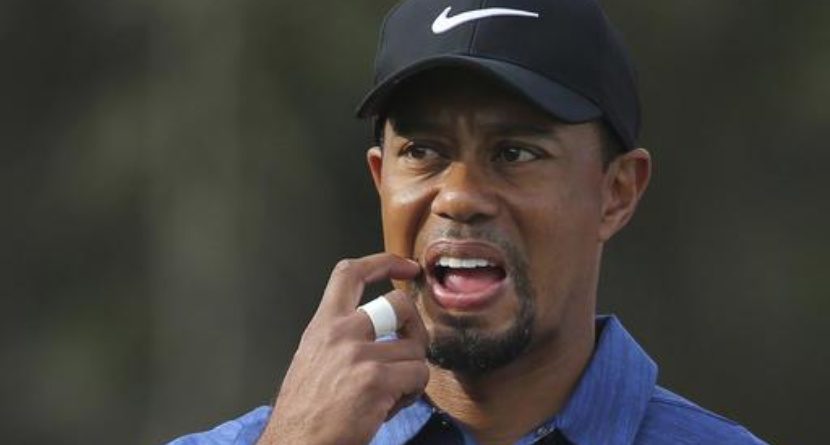 Tiger Woods withdrew from a scheduled press conference on Wednesday, citing back spasms. Yes, this is real life. Two weeks ago he took a WD at the Dubai Desert Classic for the same issue, which then prompted him to pull out of this week’s Genisis Open, which his foundation hosts, and the Honda Classic a week later.

“My doctors have advised me not to play the next two weeks, to continue my treatment and to let my back calm down,” he said in a statement.

He was scheduled to have a press conference on Tuesday at Riviera which then got pushed to Wednesday.

“After receiving daily treatment the last several days on his on-going back spasms, Tiger Woods has again been advised by doctors to limit all activities and will not hold a press conference Wednesday,” officials announced in a statement

Still receiving back treatment, Tiger cancels press conference after his doctors tell him to ‘limit all activities’ https://t.co/WBZX93gEJl pic.twitter.com/SbdZDNmMyn

Then on Wednesday his agent, Mark Steinberg spoke on behalf of Woods who was in L.A. but not at Riviera Country Club.

”He flew out here and got to see one of his doctors,” Steinberg said. ”Based on the work they did the last couple of days, they advised he just stay horizontal. It’s best to listen to the doctors. The ultimate goal is to get out and play.”

”The hope was the spasms would calm down,” he continued. ”And they haven’t.”

While the idea must have been to perform media obligations for the Tiger Woods Foundation, inevitably questions about his health and his future would be asked.

”It would have gone like many of them has gone the past several weeks – a lot of questions and no answers. Frustrating for him,” Steinberg said. ”But he has given full, maximum effort to get back out here.”

Looking at the PGA Tour schedule, the next chance we may see Tiger could be at the Arnold Palmer Invitational, but as of this moment, being able to stand up seems to be the priority.

”The goal is to get everything to calm down, have it calm down for a while, continue to get treatment and get back to a place where he’s chipping and putting and hitting balls,” Steinberg continued. ”We’re not talking about an extended break.”

BREAKING NEWS: Tiger Woods has WD’d from lunch at 1:30 p.m. next Friday. Also, breakfast on Tuesday the 28th is iffy.