Reliving The Improbable Return Of The Tiger-Charlie Show 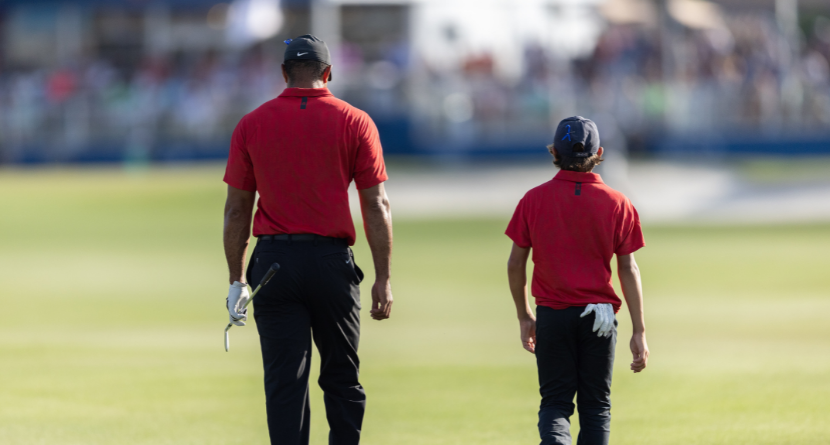 We’ve seen him do it so many Sundays. Clad in red-and-black, hunting flags and twirling clubs and stalking victory with a steely look in his eye.

And Charlie Woods’ dad played, too.

Jokes aside, the final round of the PNC Championship nearly delivered a storybook finish to a weekend that already felt like a gift for golf fans. Within the same calendar year a horrific rollover crash thrust Tiger Woods’ game into the darkest place it’s ever been (which, if you’ve been following along, is really saying something), here he was at the PNC Championship, blitzing past the rest of the field alongside his adorable heir, 12-year-old Charlie, and flirting with a tournament scoring record.

Team Woods fired a final-round 57, one shy of the lowest single-round mark any team has posted. In their matching Sunday Tiger gear, father and son racked up a tournament-record 11 straight birdies — four more than the next-longest streak this weekend — before a costly par on the par-5 18th cleared the way for John Daly and his son, John II, to win with a record-setting two-day score of 27-under-par.

“To push as hard as we have the last seven months with taking no days off and just working our butts off each and every day, and to have this opportunity to be able to play with my son and to have these memories,” Woods said, “for us, for both of us, our lifetime, it’s worth all the pain.”

In the end, Tiger and Charlie Woods had to settle for edging out their rivals, Justin and Mike Thomas, but ultimately falling short in their quest to strip the championship belts off them. There should be some spicy matches in that foursome’s future. And Sunday’s breathtaking birdie binge cemented a couple of very important developments: there appears to be PGA Tour golf in Tiger’s future…and maybe Charlie’s as well.

Charlie Woods hasn’t smiled in like an hour. Just hit a butter cut 4 iron to 4 feet and holed it from the back tees. Did not acknowledge any of the people yelling his name as he walked to the next tee. Tunnel vision. Apple, meet tree.

If you happened to miss it — or just want to relive all the wholesome highlights — we’ve got you covered. Or, more accurately, we’ve rounded up some of the best Tiger-Charlie moments from the content bonanza that this event tends to yield. From Nelly Korda geeking out in the presence of the GOAT to JT taking a chicken tender break in Tiger’s cart, you’ll find a comprehensive #ICYMI breakdown below:

Get Used To It, Kid

Charlie Woods teeing off at the @PNCchampionship.

This birdie was all Charlie! @TigerWoods‘ son’s tee shot, putt, and walk in. Dad approves.

Show Him The Money

The Apple Doesn’t Twirl Too Far From The Tree

Making Time For The Fans

Nelly met Tiger for the first time. Her reaction says it all. 🤗 pic.twitter.com/Wn2yEFP42h

Reunited And It Feels … So Weird?

Tiger and Joey picked up right where they left off… for the most part. 😂

We caught up with them after Round 1 of the PNC Championship to discuss their relationship and first competitive round together since Tiger’s car accident. Full interview: https://t.co/ARKoJToKtq pic.twitter.com/DtEeJ44wcb

Fit To Be Tied

One of my favorite memories from this week will be Karl Stenson and a group of 11-year-olds gathered behind the 18th green, rooting desperately for Charlie — and Tiger too

Charlie picking up his marker early before dropping a birdie as Tiger fist pumps in the background has happened like four times in 10 holes, and it’s awesome every time. pic.twitter.com/7KbEvtWwKq