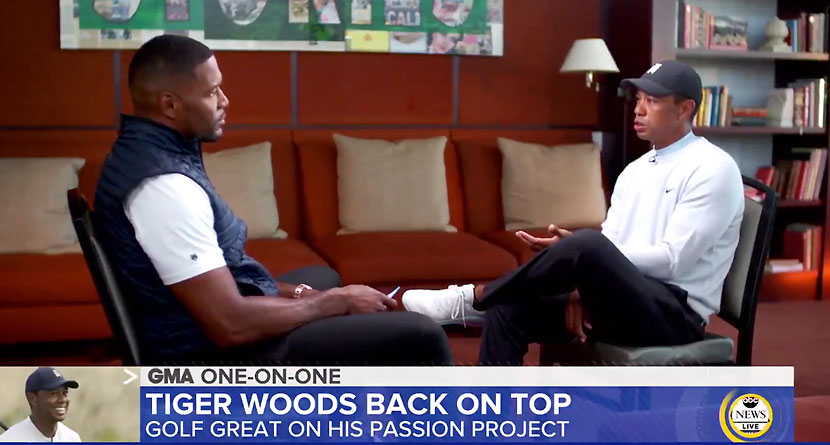 While the craziest story to come out of Tiger Woods’ inaugural Nexus Cup last week was that two donors paid a combined $160,000 to have breakfast with the 15-time major champion, perhaps the most important news for golf fans was what Woods told Good Morning America’s Michael Strahan during a sit-down interview.

In a segment on Friday’s edition of GMA, Strahan and Woods talked about the Nexus Cup, Woods’ TGR Foundation, his trip to the U.S. Open as well as Woods’ health as he prepares to begin his 2019-2020 PGA Tour season in five weeks in Japan.

“I got the clearance last week to start full practice, and so I played nine holes the other day,” Woods told Strahan. “It’s sore, yeah, but now I can start lifting and getting my muscle back and getting my weight up.”

.@TigerWoods is back on top of his game, so @michaelstrahan thought it would be a good time to challenge the golf great to an epic re-match.

The golf legend talks #NexusCup, his legacy and what he wants his kids to learn from him. https://t.co/i9rZzYNwW0 pic.twitter.com/Mz4Zz9fJ7X

Reports from GolfDigest.com described Woods as “spry” throughout the week at Liberty National and one clip in particular from his GMA interview gave credence to that as well. Upon making a putt in a one-on-one contest with Strahan, Woods went with his vintage celebration and his knee looked no worse for the wear.

this, from Tiger on GMA, is the perfect putter flip. lands on that green like a feather. mesmerizing. pic.twitter.com/BDOmc26Vn3

“The reigning Masters champ didn’t hit any full shots, but said he was cleared by his doctors to resume playing golf as of last week,” Alex Myers wrote in the GolfDigest.com piece. “Tiger remains on track to return to competition at another inaugural event, GOLFTV’s “The Challenge: Japan Skins,” on Oct. 21 before playing in the PGA Tour’s Zozo Championship later that week.”