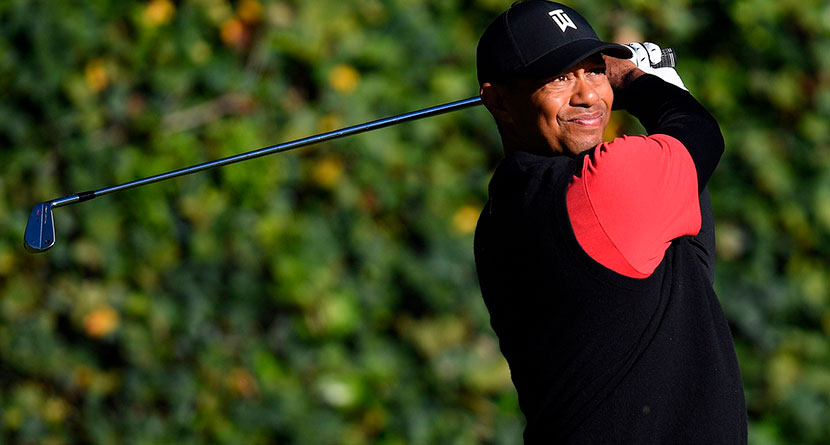 Tiger Woods announced on Thursday that his 2020 season is going to get underway in two weeks at the Farmers Insurance Open at Torrey Pines, site of eight of his PGA Tour winners, including the 2008 U.S. Open.

In the same social media announcement, Woods committed to playing in the Genesis Invitational at Riviera Country Club, an event in which Tiger serves as the tournament host and which benefits the TGR Foundation.

Last year, the Genesis Open was elevated in stature by the PGA Tour, which results in a limited 120-man field and other perks given to only a few other events on the schedule.

“It’s an honor for us to be in the same category as Jack Nicklaus and Arnold Palmer,” Woods said tournament’s new status. “Those are two legends of the game. For us to have this type of elevation, all the things we want to have happen for the tournament are going to happen. On top of that, to be able to host the tournament each and every year at Riviera, where it all started for me, it’s come full circle.”

Excited for this season to begin @FarmersInsOpen and @TGRLiveEvents’ @thegenesisinv, our first year as an invitational. See you soon west coast.https://t.co/BgwZz9Bc7j

The Farmers Insurance Open (Jan. 23-26) and Genesis Invitational (Feb. 13-16) are the only two events on Woods’ schedule currently, but that hasn’t stopped prognosticators from making educated guesses as to where else Woods will tee it up in the build-up to his Masters defense in April.

Woods’ schedule is likely to be dictated by his body, which makes playing multiple weeks consecutively harder to do with each passing year. His first two commitments rule out playing in the Waste Management Phoenix Open and the AT&T Pebble Beach Pro-Am, the two events that take place between the Farmers and Genesis, as well as the Puerto Rico Open the week after Riviera.

From there, Woods faces some decisions. The next four events on the schedule have been staples of his career trajectory — the WGC-Mexico, the Honda Classic, the Arnold Palmer Invitational and The Players Championship.

The bookend events are big opportunities for him to bolster FedEx Cup and World Ranking points as he keeps an eye towards the Tokyo Olympics later this summer. That means one of the middle two events is likely to be squeezed out. Given the API’s elevated status and Woods’ deference for The King, it would stand to reason that the Honda Classic is the big loser again this year.

After The Players, Woods will likely tee it up only one more time on Tour between Sawgrass and Augusta at the WGC-Dell Match Play, another free FedEx Cup, free World Rankings points, free money bonanza that will guarantee him some reps towards the end of March.

From there, it’s likely a week off before he goes for his 16th major championship at Augusta National Golf Club.