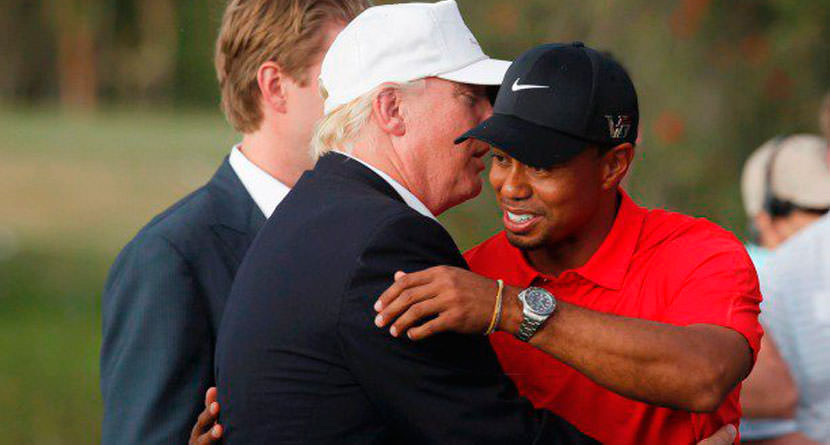 We’ve heard a lot of stories over the past year about what it’s like to play golf with President-elect Donald Trump, but for the first time we have an actual breakdown from one of the best players in the world.

How many strokes do you think Kai is going to give @tigerwoods and @realDonaldTrump ??? #golf pic.twitter.com/QyW9M6g2sb

Tiger Woods notoriously teed it up with Trump at the end of December at Trump International in West Palm Beach, and in a comprehensive blog post, Woods, among other things, broke down what the next President of the United States is like on the course.

I recently played with President-elect Donald Trump. What most impressed me was how far he hits the ball at 70 years old. He takes a pretty good lash.

Our discussion topics were wide-ranging; it was fun. We both enjoyed the bantering, bickering and needling. I also shared my vision for golf and what I’m trying to do.

We didn’t have a match and played for fun. I was testing drivers and fairway woods, and changed some settings. I think he enjoyed seeing the difference in shots when you experiment. I’ve now had the privilege of playing golf with Mr. Trump, George H. W. Bush, Bill Clinton and Barack Obama, and I appreciate the opportunity.

Some other topics in Woods’ more-than-1,500-word opus included his take on his health, his upcoming schedule, thoughts on his return to competitive golf at the Hero World Challenge and a few words on his favorite football teams.