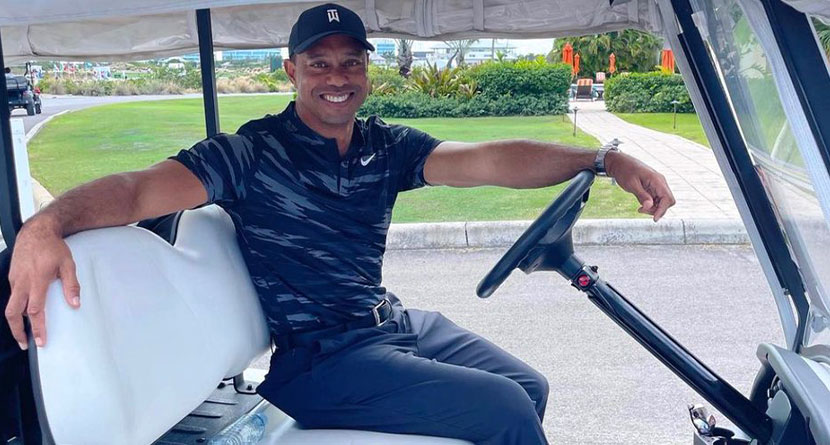 On Monday, Tiger Woods sat down with his content partners at Golf TV / Golf Digest in a wide-ranging 40-minute interview that eased Woods back into the public domain for the first time since his February car accident.

The next day, Woods met with the assembled media at the Hero World Challenge in Albany, Bahamas. The press, while largely thankful to have Woods back in front of a microphone again did ask a few questions that didn’t make it past the vetting a day prior.

Most notably aside from the rehashing of his previous days’ talking points, Woods was asked directly about the car accident and his recollections as well as his thoughts on the various splinter leagues that have come into focus over the past year.

Perhaps unsurprisingly, Woods swatted away the question about the accident, saying, “All those answers have been answered in the investigation, so you can read about all that there in the post report.”

“There are a lot of questions that Tiger still should face, and it’s an indictment of golf media that he wasn’t actually asked any follow up questions about that.”

The non-answer lit a public debate over whether Woods owes more of an explanation of the circumstances surrounding his crash — and previous citations for impaired driving — but Woods made his feelings clear in response to a question later in the press conference.

Q. When it comes to the day of the crash, clearly that’s something that you’re hoping to keep private. Is that something that you feel is sort of your business and not the rest of ours, for lack of a better phrase?

TIGER WOODS: Well, I kind of feel that way with most of my life. Doesn’t really work out that way.

While the accident-specific question was a non-starter, and the majority of the rest of the line of questioning was in line with what Woods expounded upon a day prior.

However, when the question of the Premier Golf League and Saudi Golf League was broached, Woods offered a strong endorsement of the PGA Tour when asked how he would advise a younger player.

Tournament host @TigerWoods meets with the media at the Hero World Challenge. 🎤 https://t.co/8T05NMTFKf

“It’s going to be his decision, period. I’ve decided for myself that I’m supporting the PGA Tour, that’s where my legacy is,” Woods said. “I’ve been fortunate enough to have won 82 events on this tour and 15 major championships and been a part of the World Golf Championships, the start of them and the end of them. So I have an allegiance to the PGA Tour.

“And I understand that some of the comparisons are very similar to when Arnold and Jack broke off from the PGA of America to start the Tour. I don’t see it that way. I think the Tour has done a fantastic job, Jay’s done an unbelievable job during a very difficult time during the pandemic.”

Finishing, Woods got to what seemed to be his overarching feeling about professional sports, and golf, in particular: you earn what you’re paid.

“I think the Tour is in great hands, they’re doing fantastic, and prize money’s going up,” he said. “It’s just not guaranteed money like most sports are. It’s just like tennis, you have to go out there and earn it.”