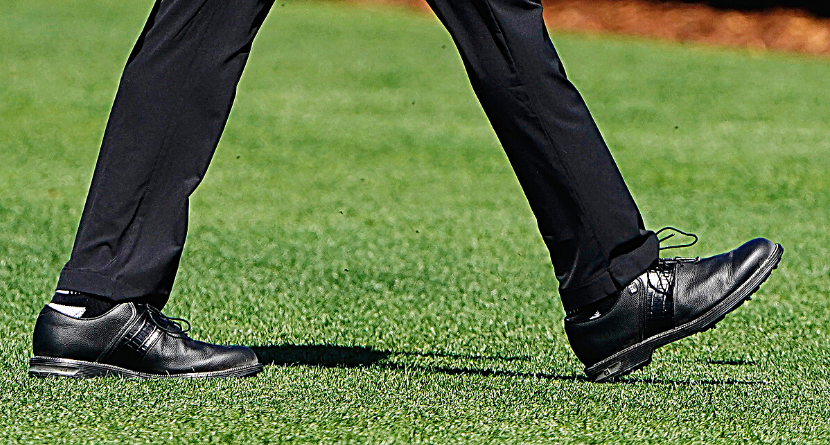 If you didn’t know Tiger Woods had been through a traumatic injury and a grueling rehab prior to his Sunday practice session at Augusta National Golf Club, there weren’t any obvious visual clues to tip you off.

Killer peach-colored polo for which you immediately searched on Nike.com? Check.

Black shoes, black pants and not a hint of a limp? Check, check and check.

But upon closer inspection, Woods’ footwear choice is where the eagle-eyed among his followers arrived at a surprising conclusion: he had swapped his Nike swoosh for a pair of FootJoys. The brand’s Premier Series Packard model, to be exact.

So ends a 26-year partnership with Nike…just kidding. The switch is obviously temporary and the reason is hardly scandalous. Woods, as you might expect, is looking for any added support he can get as he seeks to return to competitive golf on a course whose hilly terrain is well-documented.

Still, his longtime outfitter was compelled to release a statement after the swap started to attract headlines on Sunday.

“Like golf fans around the world, we are delighted to see Tiger back on the course,” Nike said in a statement. “He is an incredible athlete, and it is phenomenal to see him returning to the game at this level. His story continues to transcend sport and inspire us all. As he continues his return, we will work with him to meet his new needs.”

The move was solidified on Monday when Woods returned to the course wearing the white model.

For their part, FootJoy declined to comment when reached by Golf.com equipment editor Jonathan Wall, who notes that this isn’t the first time Woods has made an Augusta-specific footwear choice ahead of the Masters. He wore a 2011 Nike Tiger Woods model during the 2015 Masters as a result of a recent swing change.

Perhaps there’s some bitterness on the part of FootJoy that a lasting pact is unlikely to be reached. But a healthy bump in online sales of the Premiere Series Packard, which retail at $199.99, has to offer some consolation.