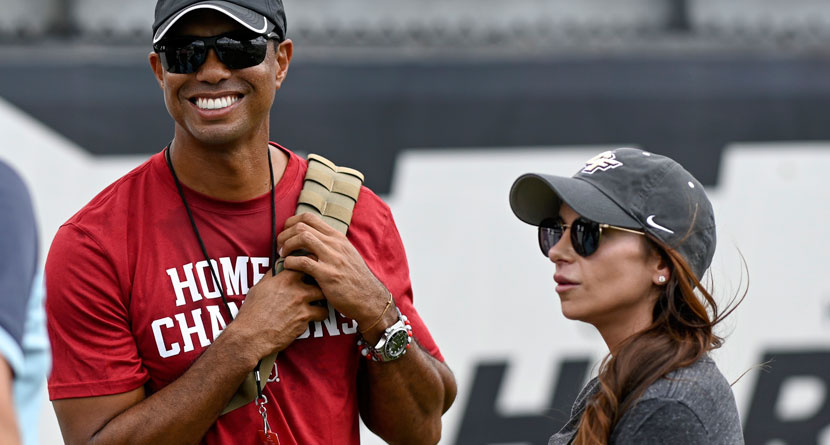 Three months after Tiger Woods was dismissed from a wrongful death lawsuit filed by the parents of a former bartender at a Jupiter, Florida restaurant that bears Woods’ name, his girlfriend, Erica Herman, had her name voluntarily removed as a defendant as well.

According to Mark Schlabach of ESPN.com, court records from state court in Palm Beach County, Florida noted that Herman’s name was removed from the civil lawsuit on September 10th.

The lawsuit, which seeks damages for the death of Nicholas Immesberger, previously claimed Herman, Woods’ girlfriend and general manager of The Woods Jupiter, and Woods had contributed to the death because “the employees and management at The Woods continued to serve Immesberger alcohol to the point of intoxication knowing that he had driven to work and had no other way home,” and employees and management “had direct knowledge that Immesberger had a habitual problem with alcohol.”

Immesberger died of injuries sustained in the crash after leaving the establishment. Immesberger had a blood-alcohol level of .256 at the time of his death, more than three times the legal limit.

Erica Herman was dismissed from a lawsuit that alleged a man who worked as a bartender at The Woods, where Herman is general manager, was over-served for about three hours after his shift before fatally crashing his 1999 Corvette. https://t.co/lYFo4Ldny5

When Woods had his name dropped from the suit in June, his attorney, Barry Postman, wrote in a statement that the 15-time major champion should have never been included in the lawsuit to begin with.

“The decision (by the estate) was clearly appropriate and reflected the fact that Mr. Woods should not have been included in the lawsuit in the first place because he had nothing to do with Mr. Immesberger’s death,” Postman wrote in a statement, according to The South Florida Sun-Sentinel. “While the situation was tragic, the facts will ultimately show that the cause of Mr. Immesberger’s car accident were the many decisions made by Mr. Immesberger on the night of his passing.”

In a statement released to ESPN.com on Tuesday, Postman reiterated his previous comments as it pertained to who was to blame for Immesberger’s death.

“While the untimely passing of a young man is tragic, the decision to over-consume alcohol, take a significant amount of illegal drugs and then get behind the wheel of a car and drive at an excess high speed rests with Mr. Immesberger alone,” Postman said.