How Tiger Woods Has Been Spending His Quarantine 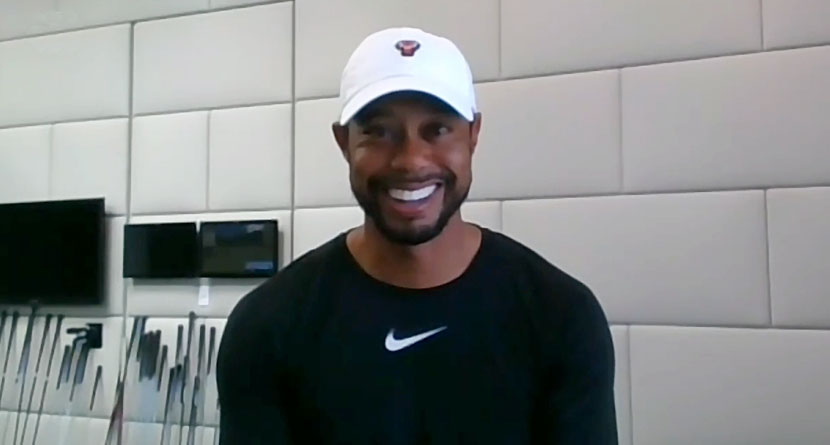 In his first extended interview since February, Tiger Woods brought his fans inside his home via a video chat with GOLFTV’s Henni Zuel on Thursday and chatted for nearly 20 minutes about everything from his health, fitness and state of his game to what he and his family are doing to pass the time while on quarantine in South Florida.

The wide-ranging interview hit on a variety of topics, and can be seen in full below, but here are some of our biggest takeaways from Woods’ interview.

Woods Is Healthy And Fit

Perhaps the biggest takeaway of the interview was hearing Woods talk about his health and fitness level. Back when life was a bit more normal, questions circled above Woods’ head about the state of his surgically-repaired back, which resulted in him not making a start since February’s Genesis Invitational.


Woods skipped the WGC-Mexico Championship, the Honda Classic, the Arnold Palmer Invitational and the Players Championship in recent weeks.

“Night and day,” Woods said of his general level of health. “I feel a lot better than I did then. I’ve been able to turn a negative into a positive and been able to train a lot and get my body to where I think it should be at.”

Woods has been re-committed himself to cycling during his downtime, which allows him to get outside a bit and feel the wind on his face.

He Has Been Playing Some Golf

Lamenting the fact that his practice regiment has no end goal in sight, Woods said that he has been able to get out to Medalist Golf Club to play “quite a bit” with his son, Charlie.

“I’ve been able to play some golf,” he said. “Fortunately, Medalist Golf Club is still open here — virtually every course to the south of us is closed, but we remain open, so it’s been nice to go out there and hit some golf balls a little bit.

“The hardest part that, we always talk about ourselves as professional golfers, is that it’s weird practicing with no end goal to get ready for. Hypothetically, it could be this, it could be that. It changes from day to day. There seems to be something new, something different, and that’s one of the more difficult parts about it.”

Tiger And Charlie Have Been Competing For The Green Jacket

While Woods said he doesn’t have much concrete understanding of when he is practicing to return, he does know what he’s playing for, especially in putting contests with his son.

Woods relayed that he and Charlie are having putting contests with the green jacket on the line – whoever wins gets to hang it in their bedroom closet. While Woods has bested his 11-year-old son most of the time, he even seemed proud in defeat.

“The fact that he has been able to earn it off of me, there’s no wins that are given in this family,” he said. “It’s been fun to see him tease me about beating me. He said it’s where it belongs.”

Tiger Is Awful At Puzzles

One thing Woods’ family likes to do to pass the time is put together puzzles, and not just 50 or 100-piece options — Woods relayed that his daughter, Sam, and girlfriend, Erica, have completed 2,000-piece puzzles and are now onto a 3,000-piece challenge.

“Once we’re done with the borders, I’m useless,” he said.

You’ve likely seen pictures of Woods’ version of the 2020 Champions Dinner — him, his kids and his girlfriend — sitting around a table of what would have been the same menu he would have served past Masters champions. What you likely didn’t know was that the meal ended with a food fight of sorts.

Checking in with @TigerWoods at home.

But don’t worry… Woods took the green jacket off before the icing started flying.

Tiger Wishes The Masters Was Happening This Week, Too

The arrival of warm weather and pollen signifies different things for different people, but for golfers it means that the Masters is right around the corner. Tiger felt that magnetism as well, and admitted it even made him a little irritable.

“I was talking to (Justin Thomas) about this the other day and I felt energetic, I felt really alive and wired and kind of irritable and I didn’t know what was going on,” he said. “And I realized it was Sunday morning. I was supposed to be flying out to (Augusta) to hand out trophies to all the award winners (at the Drive, Chip and Putt). And my body, subconsciously I knew I was supposed to be getting ready to leave and start playing the Masters. (I thought) it’s not that; you’re not playing this week.”

You can check out Woods’ full interview in the video above, at GolfDigest.com for American readers or on GOLFTV for international readers.