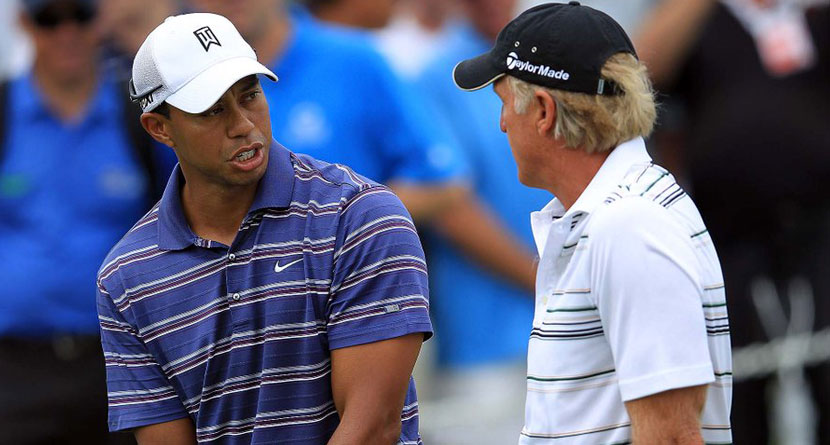 Greg Norman isn’t one to keep his opinions to himself, so when he was asked about Tiger Woods in a recent Men’s Health interview, the Shark had no problem putting the reigning Masters champ and recent winner of his 82nd PGA Tour event on blast.

After a few introductory questions about Norman’s lifestyle habits and fitness regiment, Dan Williams, the writer of the piece, switched gears and asked Norman about Woods’ win at the Masters.

“What did you feel when Tiger Woods won the US Masters this year?” Williams asked. “I ask because there doesn’t seem to be any bond between the two of you.”

Norman didn’t shy away from the question, answering with a recounting of a gesture he made that he felt was rudely denied.

“Yeah, look, I’m happy to clear that up for you,” Norman began. “Like, when you ask me a question, I’m going to give you an honest answer. I’m not going to bullsh*t to you. I’m also going to draw on my experience of the past in terms of what Jack Nicklaus did for me, what Arnold Palmer did for me where there was that respect handed off from the generation before you.

“It’s a code of conduct in a lot of ways. Very few people know this: When Tiger won the Masters this year, I wrote him a handwritten note and drove down my road, maybe a quarter of a mile, and hand-delivered it to his guard at his gate. I said, ‘Hey, this is Greg Norman here. I’ve got a note for Tiger — can you please hand-deliver it to him?’ Well, I never heard a word back from the guy. When I won my first major championship, Jack Nicklaus was the first person to walk down out of the TV tower and congratulate me.

“I don’t know – maybe Tiger just dislikes me. I have no idea. I’ve never had a conversation with him about it. I’ve always been respectful about what his father did for him. I played nine holes with him at his father’s and IMG’s request when Tiger was 14 or 15 and I was the No. 1 player in the world, to give an assessment of this kid. So, I have always been willing.”

Fit for LIFE – physically and mentally! Honored to be featured on @MensHealthAU’s November Legends Issue ?? pic.twitter.com/rZWUg3gBSp

Woods and Norman’s relationship obviously spans decades as two of the game’s top performers had their careers overlap in the late 1990s and early 2000s, but it’s not hard to see how or why Tiger didn’t respond to Norman’s congratulations.

Notoriously one to hold a grudge, Norman has given Woods plenty of reasons to distance himself from the Aussie legend. As Golf.com’s Dylan Dethier detailed, there was more than one comment from Norman over the years that likely made its way back to Tiger.

On three occasions in particular, Norman made news for comments that couldn’t have rubbed Tiger the right way. In 2011, International Team captain Norman mentioned he would have taken Keegan Bradley over Woods as a captain’s pick. Woods stuck it to Norman by winning the clinching point.

The following year, Norman told FoxSports.com that he believed Woods was being intimidated by Rory McIlroy as the Northern Irishman was in the midst of winning four major championships in four years.

Finally, two years ago, Norman was one of the last to come around on Woods’ latest comeback.

“Look, he’s a name. He’s moved the needle for quite a long time in the game of golf,” Norman said. “Everybody was wondering, you know, the speculation of him saying, ‘I may never play golf again,’ and then all of a sudden he says he’s hitting the ball 330 yards. Big difference from there to there, right?

“I hope he manages his expectations more than everybody else’s expectations being [that] he’s going to come back and be Tiger of past. I think he still has a little bit of time on his side, but not a whole lot.”

Whether Woods is right or wrong in his grudge-holding, it’s not so surprising that he decided not to respond.