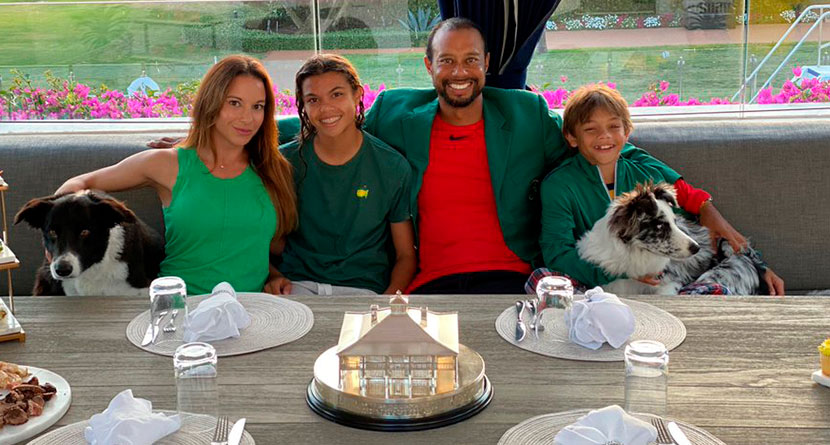 Typically on Tuesday evening of Masters week, all living and able-bodied former champions of the year’s first major congregate for a dinner that Ben Hogan began in 1952. Meant as a means “to reminisce, swap banter and relax,” the Masters Club, as it’s known, has a dinner hosted by the previous year’s winner with a menu dreamt up by the defending champion.

Of course, with the world in a veritable lockdown due to the COVID-19 pandemic, there is no Masters Tournament this week, and therefore, there was no Champions Dinner on Tuesday night, but that didn’t stop reigning champion Tiger Woods from hosting a special dinner of his own.

Woods appears to have simply relocated his Champions Dinner on Tuesday to his home in Jupiter, Florida and swapped company, opting instead to dine with his children, Sam and Charlie, his girlfriend, Erica Herman, and his two dogs, Bugs and Taz.

Masters Champions Dinner quarantine style. Nothing better than being with family.

Woods splashed the picture across social media on Tuesday and captioned the photo, “Masters Champions Dinner quarantine style. Nothing better than being with family.”

Eagle-eyed observers keyed in on a few clues around the periphery that warrant taking a closer look at the setup.

First of all, this was supposed to be the Champions Dinner, and back in February, Woods revealed what he was planning on serving.

“Born and raised in Southern California, and with it playing a part of my entire childhood, we’ll be having steak and chicken fajitas, plus sushi and sashimi out on the deck. We’re still debating milkshakes.” pic.twitter.com/7KAIwAfcYP

“Being born and raised in SoCal, having fajitas and sushi was a part of my entire childhood, and I’m going back to what I had in 2006,” Woods said. “So we’ll have steak and chicken fajitas, and we’ll have sushi and sashimi out on the deck, and I hope the guys will enjoy it.

“I’m debating whether or not to have milkshakes as desserts because that was one of the greatest memories to see Gene Sarazen and Sam Snead having milkshakes that night in ’98.”

It appears that Woods indeed have sushi and steak and chicken fajitas on the menu on Tuesday as well, while there was still no word on the milkshakes.

Aside from the company, the food and the jacket he was sporting, Woods’ post on Tuesday gave golf fans even one more reason to be jealous: his backyard.

Also: Imagine building this in your backyard: pic.twitter.com/K0SACsheAU

According to his website, Woods’ Jupiter Island Practice Facility is a 3.5-acre piece of property that features four greens, a wedge range and different types grass and bunkers to simulate what he would see on Tour and at the majors.