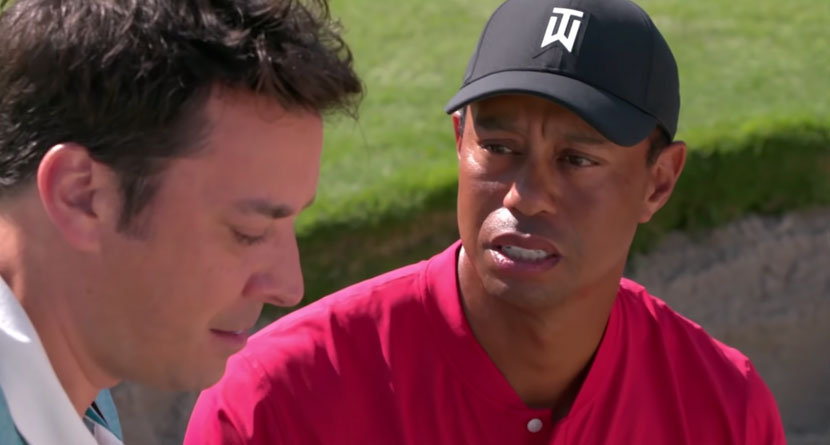 Tiger Woods showed off his comedic acting chops as well as a surprisingly spry celebration in a funny skit that aired on a special edition of The Tonight Show Starring Jimmy Fallon following the Sunday Night Football game between the Kansas City Chiefs and Indianapolis Colts this past weekend.

Filmed during the Nexus Cup, Woods’ exclusive amateur tournament that took place at Liberty National Golf Course just across the bay from Manhattan, two weeks ago, Fallon and Woods come across a buried treasure in a bunker off of one of the course’s greens.


Fallon, who was a guest emcee for one of the night’s events, appears to have negotiated a quid pro quo with Woods to get the 15-time major champion to appear in a slapstick skit with the former Saturday Night Live funnyman.

Jimmy Fallon stopped by the inaugural #NEXUSCup opening party to help raise money for the @TGRFound and put @TigerWoods in the hot seat, @FallonTonight-style. pic.twitter.com/p2l1NVMXgA

In the skit that aired on Sunday, Woods and Fallon are playing a round when Fallon taps in for what Woods tallies to be a 15 before heading back into a bunker to clean up his mess. While raking, Fallon hits something.

.@JimmyFallon and I tee off at 11:35/10:35c on @FallonTonight. #SundayNightFallon pic.twitter.com/jclMIWp6Dn

From there, the two uncover a strongbox that can only be opened by Woods smacking with a driver. Once opened, the pair can’t believe their eyes and go into a celebration that rivals any Woods has shown off on the course before.

The most impressive part of the whole montage — set to Billy Idol’s “Mony Mony” — was Woods’ agility on his recently-repaired knee. While reports came out of Liberty National that Woods looked “spry,” not even the most ardent Tiger believers could have expected this level of flexibility.

Of course, the payoff of the treasure discovery — a Bed, Bath and Beyond 20% off voucher — was the true kicker, followed by an inspirational quote signed by Fallon and Woods, “Don’t Forget To Dream.”

Celebrate the moments of your life.