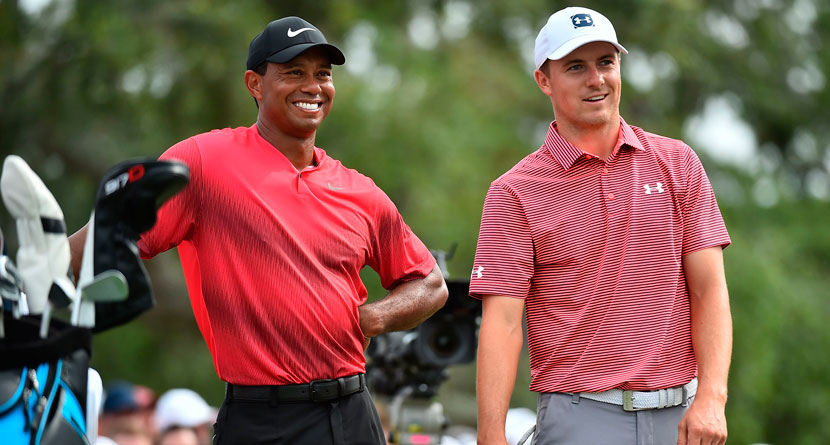 Tiger Woods is ramping up for a busy next couple of weeks as the 82-time PGA Tour champion will now compete in a pre-tournament competition ahead of next week’s Hero World Challenge before hosting the event and then traveling to Australia to play and captain the United States team at the Presidents Cup.

Woods announced on Monday that he would be participating in the Hero Shot at Baha Mar, an exhibition that will pit him against Bryson DeChambeau, Jon Rahm, Jordan Spieth, Henrik Stenson and Gary Woodland in a closest-to-the-pin contest of sorts.

Taking place on December 2, the six players will hit shots to a moving target in the Baha Mar Reflections pool, according to ESPN.com’s Bob Harig.

We’re excited to start #HeroWorldChallenge week with the Hero Shot at Baha Marhttps://t.co/tGAc91oS3H

“The Hero Shot at Baha Mar will consist of three rounds.,” the event release said. “The first round will feature three head-to-head match-ups with players hitting six golf balls toward the target. The target will consist of three rings each of different values; the outer ring earning 100 points, inner ring earning 200 points and the bullseye earning 500 points. The sixth ball in each round will earn double points if hit onto the target.

“The player from each head-to-head match-up with the highest score will move onto the second round. In the second round, the three remaining players will each hit six shots again with the lowest score of the three being eliminated. The final two players will compete head-to-head in the championship round with the player who posts the highest score in the championship round crowned the Hero Shot at Baha Mar champion.”

The Hero Wold Challenge will take place beginning on Wednesday, December 4th and run through Saturday, December 7th, a change made from years past as a result of Woods and various members of the 18-man field making the trip from Albany, Bahamas to Melbourne, Australia.

The #HeroWorldChallenge is an elite field and far from your average golf tournament. Read about what makes the field at the Hero World Challenge so special https://t.co/DdbVOUjpDE

The Presidents Cup will take place the following week at Royal Melbourne Golf Club in Australia.