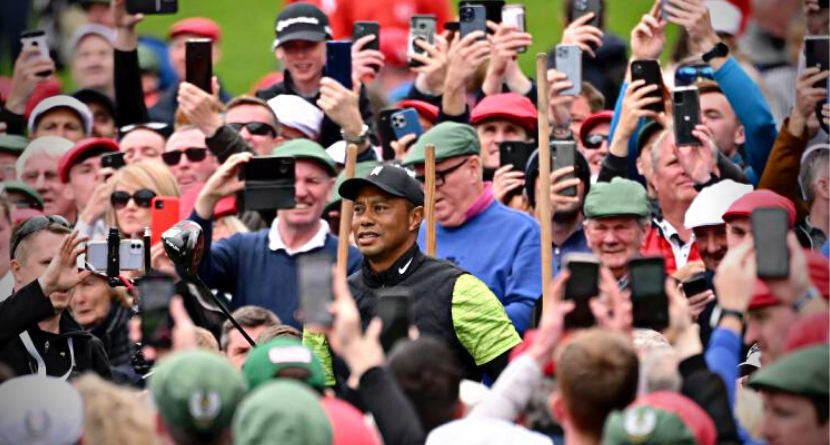 It had all the trimmings of a classic Tiger Woods highlight from across the pond: yellow flag whipping in the wind; low, spinning pitch hit to the perfect spot before trickling into the cup; a wave of a black Nike cap from a bundled-up Woods in salute of a rapturous gallery.

Perhaps he’s just whetting our appetites for next week, when St. Andrews — the setting for so many indelible Tiger moments — hosts the 150th Open Championship.

In any event, Woods’ round on Monday at the JP McManus Pro-Am — his first since he was forced to withdraw from May’s PGA Championship after the third round — is the first sign we’ve gotten in weeks that the 15-time major champ is on track to fulfill his pledge of playing at the Old Course.

The aforementioned hole-out went for an eagle on the par-5 12th, a bright spot in a round of 77 that suffered from plenty of rust — especially around the greens. Woods was in command of his long game, according to multiple reports. But he lacked the finesse with the flatstick that he’ll need to navigate the Old Course’s expansive putting surfaces later this month.

A cart was available to Woods, who committed to play in the two-day, 36-hole event back in April. But he opted to walk for much of his round, mingling with fans and cracking jokes.

“Just don’t look at our scorecard, but we’re having fun,” Woods said at one point.

Among the other marquee names in the stellar field at the prestigious Adare Manor were Rory McIlroy, Justin Thomas, Jordan Spieth, Brooks Koepka, Dustin Johnson and Bryson DeChambeau.

Xander Schauffele, who’s coming off a win at the Travelers Championship, set the first-round pace with an 8-under 64.

“Too much loft for you?”

One of Woods’ lowlights on the day was a long putt from the front of a green that didn’t have enough mustard on it to clear a ridge. By the time it rolled back to his feet, a wry grin was on Woods’ face.

Schauffele’s closest pursuer is Rickie Fowler, who shot a 5-under 67. Others giving chase are Tyrrell Hatton (4-under), Shane Lowry (3-under), Koepka (2-under), Johnson (2-under) and Sam Burns (2-under).

Play concludes Tuesday. You can follow along here for updates.