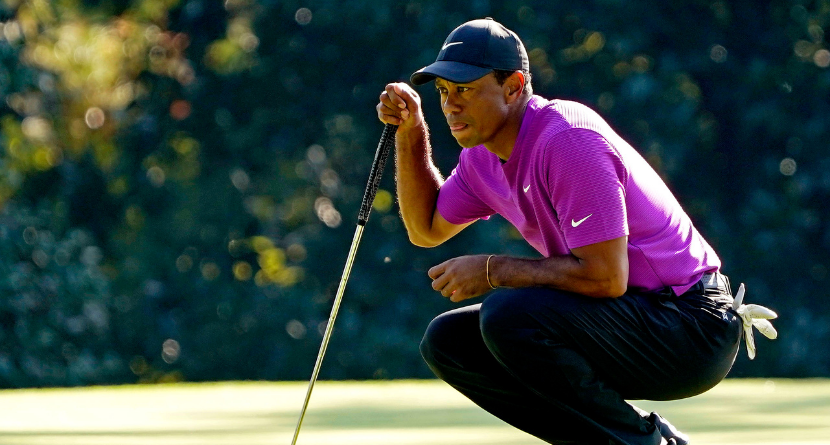 Today’s the day. Tiger Woods will hit shots that kind of, sort of count for the first time since his February car wreck, and the golf commentariat will respond in kind: by feeding us whatever glimpses and snippets they can muster during the second day of pro-am action ahead of this weekend’s PNC Championship. And we will gobble it up. All of it.

But if you need a fix before your fix, Justin Thomas’s father and swing coach, the veteran PGA of America pro Mike Thomas, offered an informed assessment of the state of Woods’ game on Thursday. Speaking at a press conference alongside Justin, Mike Thomas said, “It’s crazy how good he’s hitting it and far he’s hitting for what he’s been through.”

Tiger and Charlie Woods drew a familiar pairing at this year’s @PNCChampionship: @JustinThomas34 and his dad Mike. 🤝

Mike Thomas’ scouting report wasn’t based on iPhone footage of a range session; he admitted to playing with Tiger twice last week. And the Thomases are close with the Woodses, both in a social sense and in terms of Justin’s proximity in Jupiter, Fla. Surely JT has a keener sense than most when it comes to how close to Tour-ready Woods is. So, by extension, Mike is more than a casual observer.

”I mean, we all know him well enough to know that he’s never going to admit to be close to being where he’d like to be,” Mike Thomas continued. “He’s got some speed. He’s got some length. Hits a lot of really, really flush shots. I mean, I was surprised.”

Tiger and Charlie Woods will once again be paired with Justin and Mike Thomas when the event officially kicks off on Saturday. Their tee time is at 12:18 p.m. EST. But the Golf Channel will also be airing two hours of pro-am coverage beginning at 12:30 p.m. EST on Friday. Should be a productive workday for golf fans.