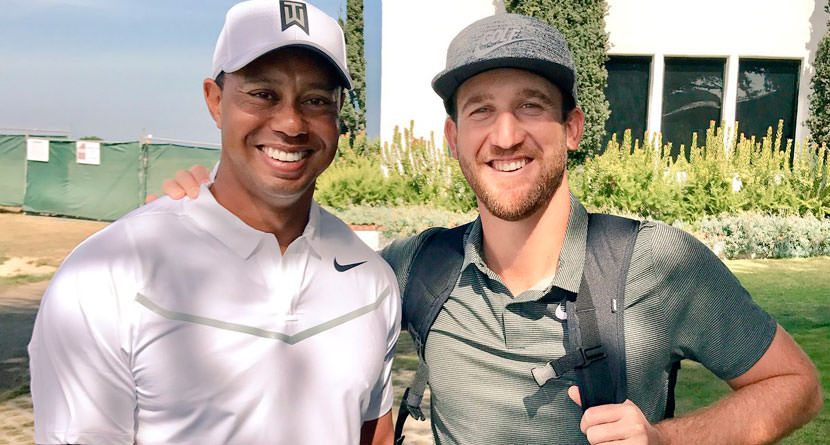 Tiger Woods’ recovery from his April back fusion surgery appears to be progressing at a rapid pace. Only three days after posting a video of his full swing for the first time since he went under the knife, Woods was on hand at his Tiger Woods Invitational on the Monterey Peninsula giving a clinic alongside fellow Nike staffer Kevin Chappell.

The TWI, which is an all-inclusive, three-day event held on and around Pebble Beach, takes place every year and benefits Woods’ foundation.

Through various video taken and shared by attendees, Woods’ “smooth iron shot” swing has seemingly progressed over the past 72 hours.

A huge thank you to @kevin_chappell for joining me on the range for a fun exhibition with #TWInvitational guests @tgrliveevents pic.twitter.com/QZiSDv7zPk

GolfChannel.com’s Will Gray broke down Tiger’s most recent comments in light of the second swing video he’s posted in three days.

Woods remains mum on a potential return to competition, and last month at Liberty National he entertained the notion that he might never play competitively again. But at that point he was also still limited to hitting 60-yard shots, a barrier he clearly surpassed with a full-swing video on Saturday. This latest offering adds fuel to the notion that Woods may be on the comeback trail.

But there still could be a lengthy path remaining between Woods and competitive golf. He is less than six months removed from lumbar fusion surgery in April, an invasive procedure that carries with it a prolonged recovery. At the Presidents Cup, the 41-year-old indicated doctors had not yet cleared him for a full return to golf.

“Just keep waiting for what my surgeon says,” Woods said on Sept. 27. “I’m still training. I’m getting stronger. But I certainly don’t have my golf muscles trained, because obviously I’m not doing anything golf-related.”

Here are some more photos and videos from Woods’ clinic taken by those in attendance.

@GolfWRX Here is a look inside Tiger Woods bag. pic.twitter.com/H2uf3Vi8Ub