Tiger Woods Limping In A Tournament He Wouldn’t Dare Miss 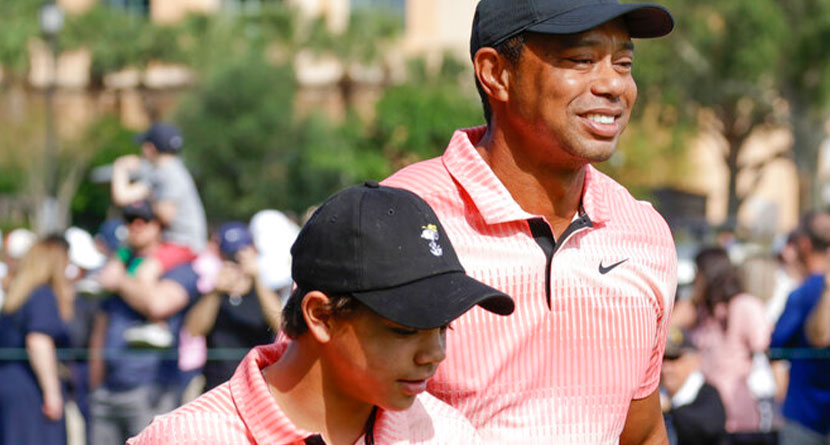 ORLANDO, Fla. (AP) — Tiger Woods and his 13-year-old son shared something else in common Friday in the PNC Championship. Both were limping.

Only one of them was in a cart.


“His ankle is not exactly … well, it’s better than mine,” Woods said, referring to son Charlie rolling his ankle and hobbling along during the pro-am. “It’s just the way it goes, just kind of bad timing on it. But we’ll be ready come game time tomorrow.”

This is one tournament Woods — Tiger or Charlie — was not about to miss. That starts with the father, who shattered his right leg in a February 2021 car crash in Los Angeles and now has plantar fasciitis in his right foot that forced him to withdraw from his Hero World Challenge two weeks ago.

He would have had to walk in the Bahamas. The PNC Championship, which pairs major champions with a family member, is sanctioned by the PGA Tour Champions. That means Woods is allowed to ride a cart.

But that could come at a cost. Asked if playing the 36-hole tournament that starts Saturday could set him back, Woods replied, “Yes.”

“You know, I don’t really care about that,” he said. “I think being there with and alongside my son is far more important, and getting to have a chance to have this experience with him is far better than my foot being a little creaky.”

That much was obvious on the first tee of their pro-am at the Ritz-Carlton Golf Club Orlando. Woods piped his drive down the middle, and as Charlie went to a forward set of tees, Woods pulled out his phone to capture the image.

Charlie Woods is so much like his dad, he’s mimicking his limp walking off the green pic.twitter.com/2T19RtrVDM

And it was obvious outside the ropes.

The temperature was in the low 50s. The pro-am can be tedious. And yet spectators stood shoulder-to-shoulder down the length of the hole, three- and four-deep around the tee box, to get a glimpse of Tiger and his cub.

Such occasions are rare these days. Woods is competing for only the fifth time since he and his son finished second to John Daly and Little John Daly last year. That includes 10 holes of the made-for-TV team match last Saturday.

A year ago, it was all about Woods coming back from the car crash, which didn’t seem possible when he was confined to a hospital bed in his home for the summer and told about doctors contemplating amputation of his right leg.

That led to him playing in the Masters (a tie for 48th), the PGA Championship (he withdrew after the third round) and the British Open at St. Andrews (missed cut).

Going forward, Woods isn’t sure what to expect.

“If I didn’t have the plantar feeling like this, then, yes, I could tell you that and I’d have a better idea,” Woods said. “But I’m supposed to be resting this thing and stretching and letting it heal. But I’m not doing that at the moment.”

As often as he smiled after his round, he didn’t seem to mind.

His son is getting taller and starting to fill out, and the swing is balanced and fluid. Woods sheepishly conceded last week during his exhibition match that Charlie finally piped one by him on one drive.

They will be paired Saturday with Justin Thomas and his father, Mike, a longtime club professional. Woods refers to them as “extended family.” Mike Thomas has a history of working with junior golfers and Woods used to have him take a look at Charlie.

“I haven’t spent near as much time in the last couple months as he’s grown so much, but he’s gotten so much stronger and longer,” Mike Thomas said. “He’s got a lot of skill, for sure.”

Woods pays more attention to how his son plays than the results he gets. They are lessons his father passed on to him all those years ago.

“This is what I was taught by my dad, is understanding how to fix it when on the fly when I’m not around,” Woods said. “One of the reasons why I always tell him why we’re doing what we’re doing, so that he can retrace the steps. And when he gets a little off, now he knows what to go back to and understand that.

“And that’s where I’ve seen the biggest growth.”

Charlie Woods isn’t the youngest player in the field. Will McGee is the 11-year-old son of Annika Sorenstam and making his debut. Also playing is 87-year-old Gary Player.

That got the attention of Jordan Spieth, when he saw both of them in the locker room.