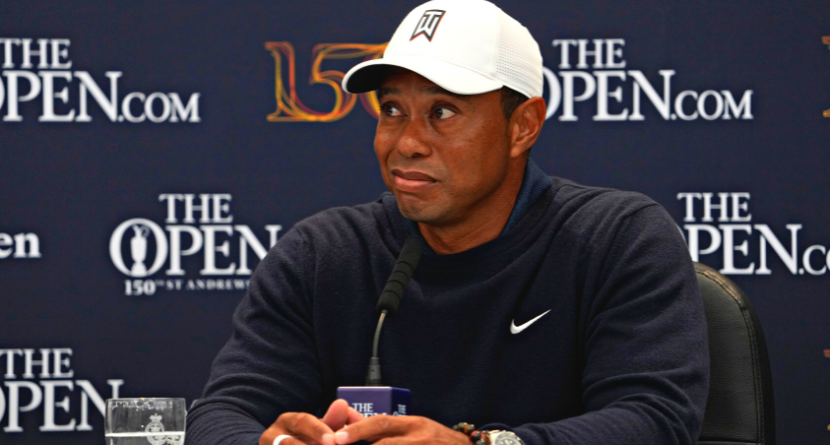 How, Woods wondered aloud, would professional golfers accustomed to the highest stakes and the most prestigious events “earn it in the dirt” now that they’ve compromised their competitive integrity?

That’s the part of this pro golf rebellion that doesn’t compute for the most blood-thirsty competitor the sport has ever seen.

For Woods — and so many of his disciples — it’s the grind leading up to a tournament that makes the hunt for trophies that much more rewarding. You toil away on Monday and Tuesday to put yourself in that thrilling position on Sunday, stalking your prey with the world watching.

Tiger’s answer on LIV was so, so good. pic.twitter.com/qjKQoYpt9c

And it’s an indisputable fact, as Woods reiterated Tuesday, that LIV Golf events do not have that juice. How could they? It’s not something that can be manufactured or conjured up with a boatload of Saudi cash.

“I understand what Jack [Nicklaus] and Arnold [Palmer] did, because playing professional golf at a Tour level versus a club pro is different, and I understand that transition and that move and the recognition that a touring pro versus a club pro is,” Woods said. “But what these players are doing for guaranteed money, what is the incentive to practice? What is the incentive to go out there and earn it in the dirt? You’re just getting paid a lot of money upfront and playing a few events and playing 54 holes.”

“I just don’t see how that move is positive in the long term for a lot of these players, especially if the LIV organization doesn’t get world ranking points and the major championships change their criteria for entering the events,” Woods said. “It would be sad to see some of these young kids never get a chance to experience it and experience what we’ve got a chance to experience and walk these hallowed grounds and play in these championships.”

Lighting into the players, particularly the ones who chose to line their pockets before they could even begin to establish themselves on the premier golf tours in the world, was just one portion of Woods’ expansive monologue.

He also had some harsh words for LIV Golf CEO Greg Norman.

“I know Greg tried to do this back in the early ’90s,” Woods said. “It didn’t work then, and he’s trying to make it work now. I still don’t see how that’s in the best interests of the game.”

Asked for his opinion on Norman’s exclusion from the numerous events honoring past champions, Woods didn’t hesitate.

“Greg has done some things that I don’t think is in the best interest of our game, and we’re coming back to probably the most historic and traditional place in our sport,” Woods said. “I believe it’s the right thing.”

You can watch Woods’ press conference in its entirety below: