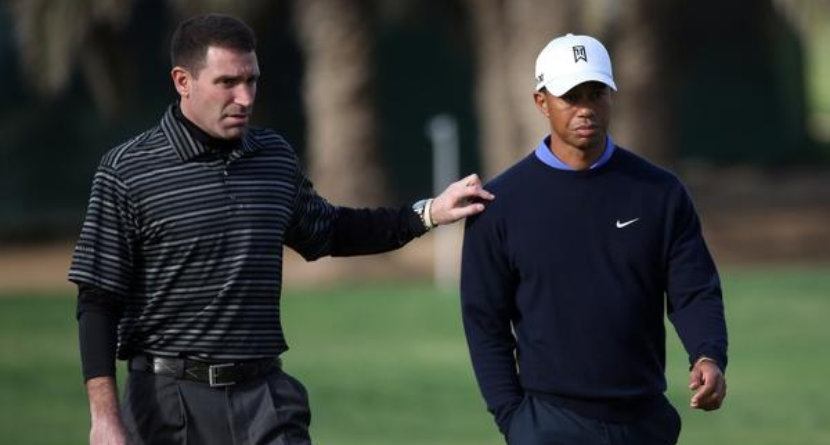 Everybody has “sources.” Whether they are true or not is a whole different story. On Friday, Tiger Woods’ manager Mark Steinberg set the record straight, according to Tiger’s camp, regarding a recent report published by Golf World about the 14-time major champion’s status for this year’s Masters.

Per that report: “According to multiple sources, Woods has not been able to play or practice since withdrawing from the Dubai Desert Classic last month because of back spasms.

“Another source said that he saw Woods recently and he ‘didn’t look good,’ adding that while he hopes he is back soon, Woods doesn’t look close to being ready and that a return at the Masters would be too soon. The source added that all Woods has been able to do of late is putt.”

Tiger’s agent has disputed earlier report: “To say doubtful for The Masters is an absolutely inaccurate statement.” https://t.co/qDexNLSxGZ pic.twitter.com/qpp6hBEjH3

In strong-worded response, Steinberg gave the following statement to Golf Channel Insider Tim Rosaforte, where he refers to the story’s author, Brian Wacker, by name:

“I have no idea who Mr. Wacker’s really close sources are. I can tell you this, nobody spoke to him (Wacker); so how he could know something that Tiger and I don’t know is comical,” Steinberg said. “I talked to Tiger four hours ago on the phone. We’re not in a situation to even talk about playing in the Masters now. He’s gotten treatments and is progressing and hoping he can do it. There’s not been a decision one way or the other. I couldn’t give you a fair assessment, but to say it’s doubtful is an absolutely inaccurate statement.”

When asked if Woods has hit balls or has been putting at his compound on Jupiter Island as the report stated, Steinberg answered: “I don’t want to talk about specifics yet. When we’re ready to get into that, we’ll disclose it. He’s working hard at getting better, he’s working hard at progressing.”

If Woods does indeed miss the Masters, it will be the third time in the last four years that the four-time champion didn’t make it to Augusta National.