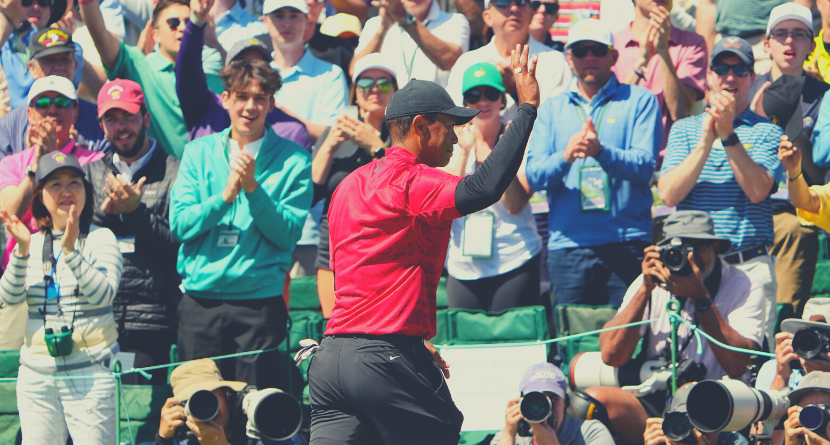 Tiger Woods, as we’ve long been told, does not do moral victories. But after the most mind-boggling display of his mental toughness to date, the 15-time major champ allowed us to count this one.

“I don’t think words can really describe that, given where I was a little over a year ago and what my prospects were at that time, to end up here and be able to play in all four rounds,’’ Woods said Sunday after wrapping up his weekend with a second straight 78. “Even a month ago, I didn’t know if I could pull this off. I think it was a positive, and I’ve got some work to do and looking forward to it.’’

Woods made it to the weekend at the Masters, just like always. It was his 22nd consecutive made cut, accounting for all of his starts since he turned professional in 1996.

A four-day total of 13-over-par 301 was of little consequence to the patrons gathered around the 18th green Sunday. They received Woods like a champion and kept roaring their approval as he made his way to the Augusta National clubhouse.

Tiger Woods walks up the 18th as he concludes another unforgettable comeback at the Masters. pic.twitter.com/JPnwDwmt3X

Bryson DeChambeau, who missed the cut eight strokes, stuck around to take in the scene.

“I came out to support the best ever,” DeChambeau told Golf.com’s Dylan Dethier. “It’s really cool — I don’t know how many chances I’ll get to do something like this.”

The best news of all? We won’t have to guess (or track flights) to figure out Woods’ next move. He told Sky Sports after the round that he intends to play in the Open Championship at St. Andrews and that the PGA Championship at Southern Hills was also a possibility.

“It’s my favorite golf course in the world … I will be there for that one.”@TigerWoods plans to play The Open in July.pic.twitter.com/Of3ewgFo1T

An opening-round 71 was, in retrospect, a sterling example of Woods’ unmatched institutional knowledge at the venue where he’s captured one-third of his majors.

In some corners of the golf commentariat, there was speculation about whether it was in Woods’ best interest to withdraw after Saturday. He was visibly pained, went the thinking, and he had already proven himself tenfold after making this stunning return some 14 months after nearly losing his right leg in a horrific rollover crash.

But that’s not who Woods is. It never has been. Never will be.