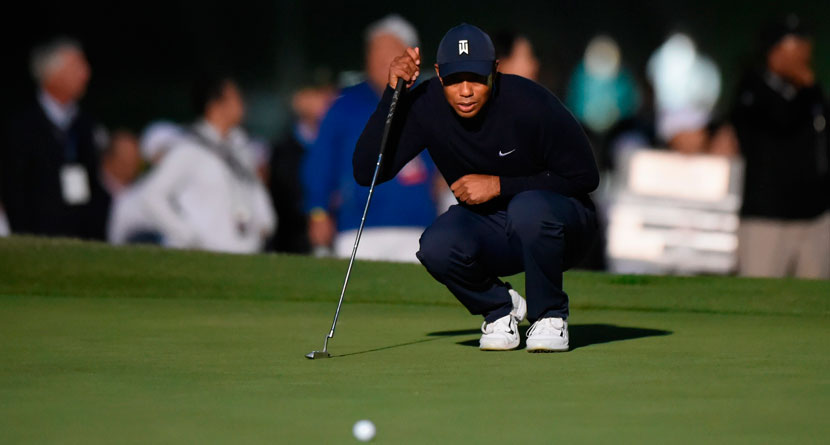 “The Challenge: Japan Skins” was never going to match the pressure or prestige of a major championship or even a rank-and-file PGA Tour event, but what the 18-hole skins game contested at Accordia Golf Narashino Country Club in Japan on Monday did provide was some star power and a change of pace for golf fans.

With skins climbing in price as the event progressed culminating with a $100,000 18th hole, the entire contest was in the balance until the final flood-lighted green.

A lot on the line today in Japan.

More as the match goes on.

Through 17 holes, Jason Day had a $50,000 lead over Tiger Woods and Rory McIlroy and a $90,000 lead over home-country hero Hideki Matsuyama, but the final-hole prize was enough to give any of the four stars the title.

Playing the par-5 18th hole, the action came down to Day and Woods — who by virtue of the format, had McIlroy and Matsuyama rooting for him. Day reached the greenside bunker in two shots and was able to get up-and-down for birdie while Woods was faced with a 12-footer of his own.

The up and down that made Jason Day your #TheChallengeJapanSkins champion. ? pic.twitter.com/g7r5N6ELCI

There were only two options: make it and extend the match, or miss it and lose.

Woods left the putt woefully short, giving Day an extra $100,000 and some ammo for his smack-talking arsenal.

“Apparently Tiger hasn’t won (a skins game) yet, so I’ve got that on him, which is good,” Day said in the post-round press conference, needling his idol. “My short game was nonexistent last week (at the CJ Cup), but it was nice to be able to hole some putts coming down the stretch, hit some good shots,” Day said. “The short game really showed up today and that’s usually the strength of my game.”

Tiger did say skins is all about timing! Fun day out with him, Rory and Hideki in Tokyo. Hope you guys enjoyed watching something different. #TheChallengeJapanSkins @MGMJapan pic.twitter.com/Ou1XOWqa2b

Woods, for his part, seemed to play his way out of some rust and appeared to be in good spirits throughout the day.

“I did not play well at the beginning. I hit a lot of bad shots and did not putt well. Once I got into the flow of competing and feeling the round, it just got exciting,” he said.

Tiger, Rory, Hideki and Jason Day sit down together after Day’s win at #TheChallengeJapanSkins. https://t.co/6wEIAUOGUc