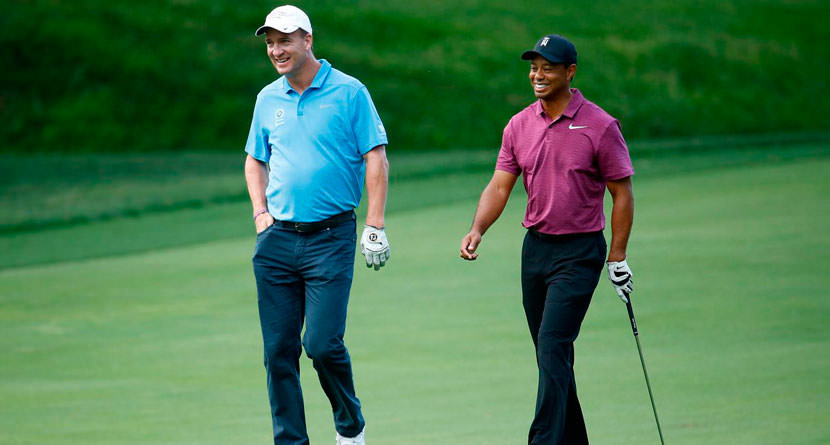 Wednesday turned out to be a pretty memorable day at the Memorial Tournament. Spectators were not only treated to the best players in the world strolling around the house that Jack Nicklaus, but the marquee pro-am grouping of Peyton Manning and Tiger Woods didn’t disappoint.

As tends to be the case at these PGA Tour pro-ams, the Tour had set up a TrackMan launch monitor on a few of the tees, which allowed the world to see the impressive — or unimpressive, depending on who you ask — numbers that the amateurs put up.

Manning, who is 6’5″ and 230 lbs., makes a good move at the ball and plays off of a 4.6 handicap, however even the power and distance a future Hall of Fame quarterback creates on the golf course pales in comparison to the PGA Tour averages.

Peyton Manning’s trackman data from driver at 17.
“2 iron numbers,” Tiger tells him with a grin. pic.twitter.com/FBvHxgVb0F

TrackMan recorded Manning hitting a driver 283.5 yards, with a 107 mph clubhead speed and a 160 mph ball speed, which is pretty impressive unless you’re Tiger Woods, who took the opportunity to give his pro-am partner some grief, calling his performance “2-iron numbers.”

Woods and Manning played in a pro-am for the fourth time on Wednesday and have been able to share a kinship throughout the professional careers thanks to some pretty interesting parallels as it pertains to their respective health.

"He sure is hitting the ball well today."

The highlight of Tiger’s day came on the par-3 8th hole where Woods missed the green with his tee shot, but found the cup thanks to a brilliant mini-flop from a downhill lie.

Chip in from the rough ✔️
Make a young fan's day ✔️

Woods tees off on Thursday alongside Jason Dufner and Justin Rose at 8:26 a.m.