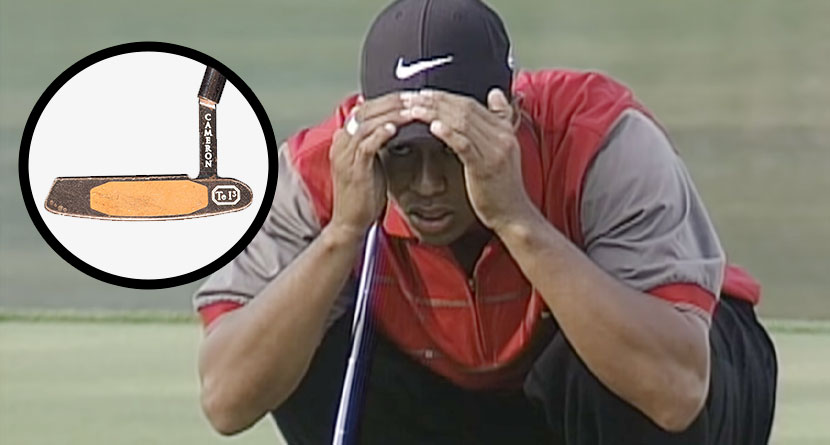 Father Time waits for no man, and that includes sporting greats like Tiger Woods who, even as he eyes a return to golf following his devastating car crash earlier this year, has become the reigning king of golf memorabilia.

Woods has long been considered the best golfer of his generation and a finalist in the argument over G.O.A.T (greatest of all-time) status, but as he’s gotten up there in age, memoriabila collectors haven’t been shy when it comes to shelling out hundreds of thousands of dollars for collectibles that belonged to, or were even made for, Woods.

As recently as August, one of Woods’ backup putters sold for just shy of $400,000, and now on the block is a major-used, tournament-winning putter that Golden Age Golf Auctions founder Ryan Carey believes will eclipse the $1 million threshold, a first in the golf collectibles space.

The club in question is one of Woods’ Newport TeI3 Teryllium putters. Golf gearheads know that the Teryllium as the putter Woods used to win the 1997 Masters, the only major he didn’t win using his famous Newport 2, but what many don’t know is that Woods used multiple Teryllium putters in the late 1990s.

Woods himself confirmed that his Newport 2, which he has used to win his other 14 major championships and still resides in his golf bag to this day, and the Masters-winning Teryllium are under lock and key in his putting studio, but Collectable, a fractional investing platform for sports memorabilia, has acquired a second gamer that has been photo-matched to the 1998 U.S. Open at Olympic Club and BellSouth Classic, which Woods won.

Those make this offering one of the most unique to ever hit the golf memorabilia market.

“The golf collecting industry is scorching hot,” said Carey. “We are seeing a massive uptick in demand — and that is long overdue.”

So, how does something like this make to auction — or fractional trading? One of Tiger’s longtime golf buddies, NFL Hall of Fame wide receiver and Buffalo Bills great Andre Reed was gifted the club by Woods.

First auctioned off in 2017, the head features Woods initials stamped on the toe along with a letter from Reed and a Scotty Cameron certificate of authenticity. While this may be a $1 million item, the average golf fan can own a piece of a piece of history thanks to the Collectable model.

Currently trading at $34.45/share, Collectable’s model is touted as “the only fractional investing platform to offer 12-4pm ET ‘continuous’ secondary trading every weekday for every eligible asset.

“This means investors can submit live Bids and Asks with instantaneous matching between those times every day from Monday to Friday, should the Bids and Offers be within the market parameters.”

Think: a mix between the stock market, sports memorabilia and NFTs. And at less than $35/share, if you’re going to dip your toe into this new-age market, there are worse items to take a chance on.