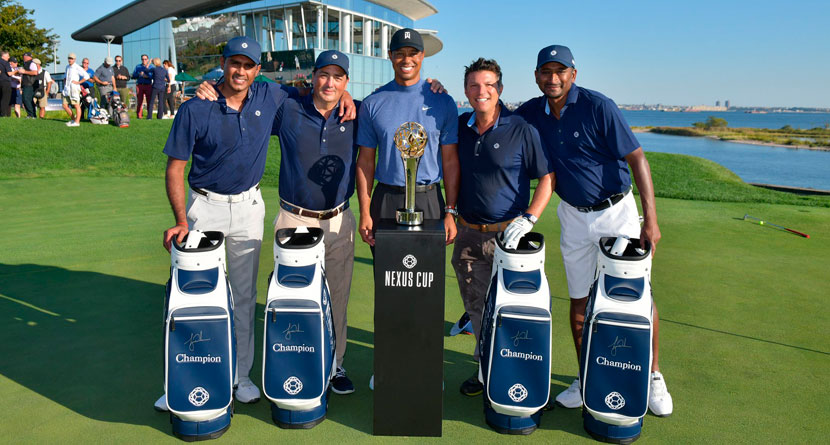 Tiger Woods and his TGR Foundation hosted the Nexus Cup this week at Liberty National Golf Club, billed as “the most exclusive amateur golf event in the world.”

The field consisted of just 18 foursomes who were chosen by invitation-only to enjoy “two days of team golf competition with curated gifts, exquisite cuisine and unforgettable evenings,” according to the event’s website.

Rumored to require a $25,000 donation to Woods’ foundation to gain entry, the lucky few who were able to make the pledge and be selected were treated to personalized team apparel and custom staff bags along with appearances by major champions Gary Woodland, Keegan Bradley and Henrik Stenson.

Excited for the NEXUS Cup at Liberty National this September. Looking forward to hosting this new event that will continue to help more students through @TGRFound. https://t.co/5hyRcGSWbX

After playing at the course, which has hosted PGA Tour events and the 2017 Presidents Cup, the guests enjoyed accommodations and meals at NEXUS Club New York as well as entertainment emceed by Tonight Show host Jimmy Fallon and Tiger, himself.

While the event was undoubtedly a success considering the donations made, guests were also able big on an array of prizes including Tiger Jam packages, Rolex watches, tickets to Boston Red Sox games as well as two tickets to the finals of the ladies and gentleman’s finals at Wimbledon.

However, the prize that made most golf fans’ ears perk up with a breakfast and “strategy session” with Woods. As you can see in the video below, two donors put up $80,000 apiece to earn the privilege of breaking toast with Woods.

Jimmy Fallon stopped by the inaugural #NEXUSCup opening party to help raise money for the @TGRFound and put @TigerWoods in the hot seat, @FallonTonight-style. pic.twitter.com/p2l1NVMXgA

Clearly these exclusive amateur invites were sent to folks with some deep pockets, but considering the money was all going to a good cause, it’s hard to be cynical about the whole thing.

Thank you to all our guests, donors, supporting Tour players, to Liberty National, to NEXUS, and my @TGRLiveEvents team for making the inaugural #NEXUSCup such a success. All to raise money for @TGRFound supporting students and giving them access to higher education. pic.twitter.com/0xJY9jGPwA