Tiger Out, Barkley & Curry In For The Match 3 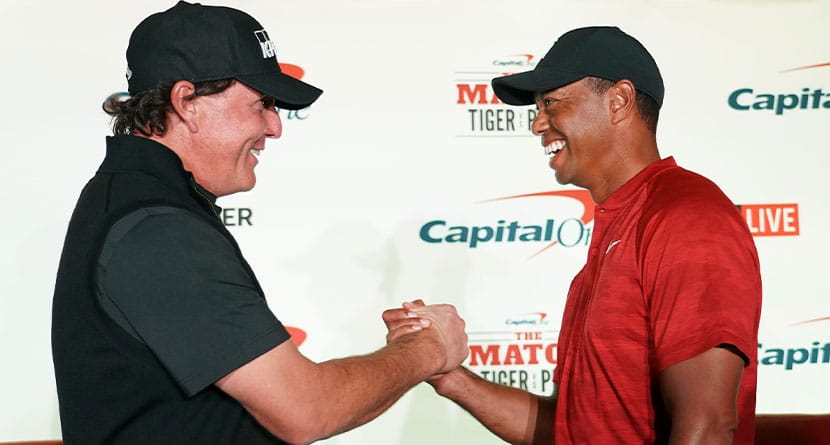 The latest edition of the made-for-TV exhibition series the featured Tiger Woods and Phil Mickelson will be without one of the headliners next month when the event is reprised at Stone Canyon Golf Club in Oro Valley, Arizona on Nov. 27.

Woods will sit this one out as Mickelson will team up with Charles Barkley and Peyton Manning will return, this time on a two-man team with Golden State Warriors star Stephen Curry.

The event, dubbed “Capital One’s The Match: Champions for Change” will be televised on TNT, and Bleacher Report will provide exclusive live content leading up to and during the event on the B/R app. According to Turner Sports, the event will put a focus on Historically Black Colleges and Universities, as well as increasing diversity and equality in sports.

“Capital One’s The Match: Champions for Change will uniquely contribute toward and highlight diversity, equality and inclusion through donations to Historically Black Colleges and Universities (HBCUs), while raising awareness and spotlighting opportunities for diversity and equality in sports,” the statement read. “All four players have previously supported diversity and inclusion initiatives throughout their careers, which has led to them teaming up for this event. Additional information on these elements, among others, will be announced at a later date.”

Peyton & @StephenCurry30 vs. @PhilMickelson & Chuck 🍿#CapitalOnesTheMatch: Champions for Change returns on Friday, November 27, exclusively on TNT and in the B/R App 🏌️‍♂️ pic.twitter.com/s3PIpK2nRa

Barkley will step out of the broadcast booth where he spent the first two iterations of The Match and put his game where his mouth is. Mickelson, for one, isn’t so sure how that will go.

“I’m excited to return for the third edition of Capital One’s The Match and get out on the course with these three legendary athletes,” Mickelson said. “While we may need a handicap for Chuck, I’m looking forward to playing with Peyton and Stephen and to help raise money for another important cause. It’s also going to give fans and viewers an up-close look at Stone Canyon Golf Club, a place that I’m extremely proud of and excited to show how special it is.”

I’m feeling pretty confident after my win that I’ll even take Sir Charles as my partner to take these guys on!

Barkley, who mixed it up previously with Tom Brady, is making some big statements ahead of next month’s match.

“Capital One’s The Match has been a lot of fun to be a part of over the past few years and I’m excited to finally show off my skills on the course.,” Barkley said. “Phil and I got this, I GUARR-AAAN-TEEEE!!!”

As for Curry, the perennial All-Star is a well-known and avid golfer having teed it up on the Korn Ferry Tour on multiple occasions. Previously a spectator to The Match, Curry is excited to get in on the action.

“Last year, I had the incredible opportunity to play a small role in the rich history of Howard University through the game of golf,” said Curry. “I truly believe an investment in HBCUs is an investment in our future, and I am honored to have the opportunity to continue to support these great institutions alongside some of my favorite players…and Chuck.”

The event is scheduled for Nov. 27 at 3 p.m. ET at Stone Canyon Golf Club in Oro Valley, Arizona.