Tiger Clowns Thomas After Outdriving Him 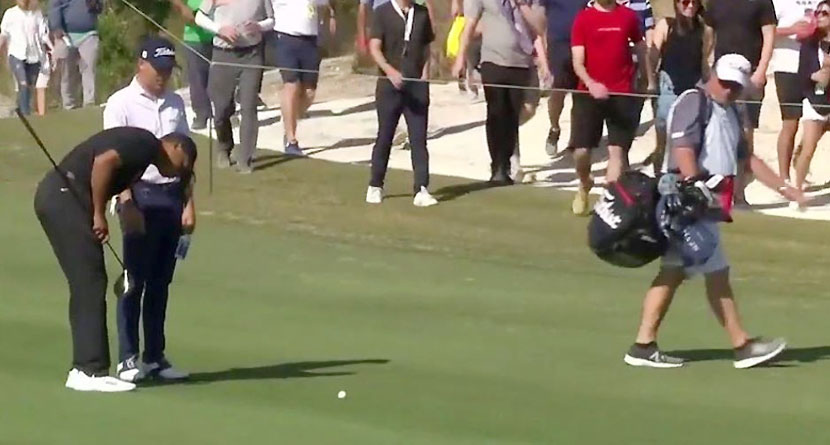 The Hero World Challenge holds an interesting spot on the golf calendar. Being played in December with an 18-man field, the event is not officially sanctioned by any major Tour, but the no-cut event does receive a good chunk of Official World Rankings points, which are nice to come by late in the calendar.

As such, the vibe around the grounds of Albany Golf Club in the Bahamas is a mixed bag of silly season giggle golf and serious competition.

As the tournament host this week and a playing captain at the Presidents Cup next week, Tiger Woods is wearing a lot of different hats over this two-week spell, but he was able to show a lighter side to the proceedings during Wednesday’s opening round.

Playing alongside friend and Presidents Cup teammate Justin Thomas, pound-for-pound one of the longest hitters in the game, Woods took advantage of one of the few times he outdrove his 26-year-old playing partner on the par-5 11th hole.

Thomas, who still held the honor thanks to a birdie on the par-5 9th hole, knocked a solid tee shot into the fairway on 11 before Woods pummeled one.

As the pair walked up the fairway, Thomas stopped at his ball while Woods came up next to him and over-exaggerated a look at the ball to identify it. As Thomas looked on, Woods made a quick comment and walked away smiling up to his second shot as JT let out a laugh as well. Both players would go on to birdie the reachable par-5.

Woods’ round started off slowly, bogeying three holes on the front nine, offset by a lone birdie. On the back, Woods righted the ship with birdies at Nos. 11, 13 and 14. He chipped in for eagle on the par-5 15th, but all the work he did to get to 3-under par by the 16th hole was undone with a bogey-double bogey finish that left him six shots behind first-round co-leaders Gary Woodland and Patrick Reed.