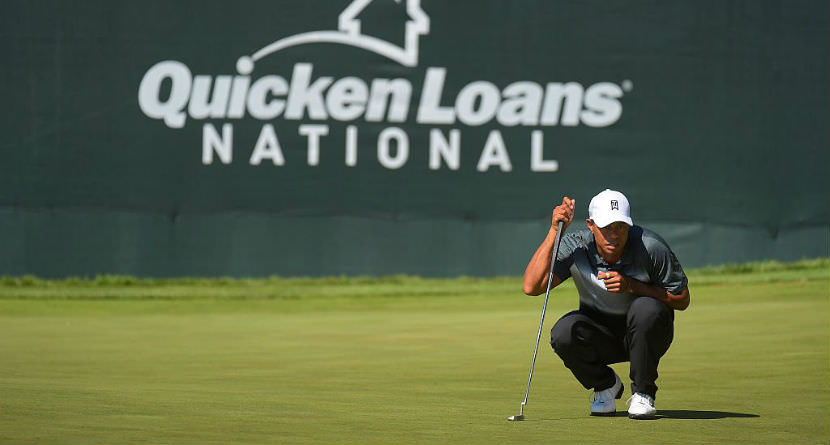 Tiger Woods was used to having sponsors lining up out the door for him. Now, he can’t find one to fund one of his own tournaments. Earlier this week, it was reported that the PGA Tour has cut ties with Congressional Country Club, which was the site of the Quicken Loans National that benefitted Woods’ foundation. The deal with Quicken Loans expired this past year and hasn’t be re-upped, and with no course to play on, the future of the Washington D.C. event is uncertain.

The PGA Tour has terminated its contract with Congressional Country Club, which was scheduled to host the Tour’s Washington, D.C., area stop next season and in 2020. It currently has no title sponsor. The termination of the contract was announced to members at Congressional via a letter on Monday.

“The Tiger Woods Foundation currently has no title sponsor for their PGA Tour golf tournament. Because of that circumstance, the PGA Tour has exercised its right to terminate our facilities agreement with them for 2018 and 2020, while they seek a title sponsor for The National,” the letter from club president Richard Sullivan Jr. read.

Tiger Woods golf tournament out from Congressional for 2018 & 2020. No title sponsor. Incredible that Tiger’s tourney cant find a sponsor

Quicken Loans took over as title sponsor of the event in 2014, and it’s four-year deal ended after this year’s tournament. Rick Singer, the president and CEO of Woods’ foundation, told the Washington Post that they remain in talks with Quicken Loans and that they hope to have a deal done in four to six weeks.

“This is one of our highest priorities,” Wood’s agent Mark Steinberg told the Post. “The event, at this point, is not going away. I want to be clear about that. We are looking for a title sponsor in the D.C. area. Where that event would be played is still up in the air. We don’t know the answer to that. We have to work on the economics and finances. But we’re actively looking, and we have a number of good leads and sponsors and are talking to them daily.”

The event began in 2007 and has been played seven times at Congressional, although this year’s tournament was held at TPC Potomac at Avenel Farms.

“Without a sponsor, the event would be a significant drain on [the Tiger Woods Foundation] resources, instead of a source of funds,” the letter read.

Woods’ foundation currently manages the D.C. stop, the 18-man Hero World Challenge played in December, and took over the Genesis Open in Los Angeles this season.

The PGA Tour also announced the official 2017-18 schedule on Tuesday which includes 49 events. However, two of those events remain up in the air. Along with Woods’ National, the Houston Open also is searching for a sponsor.