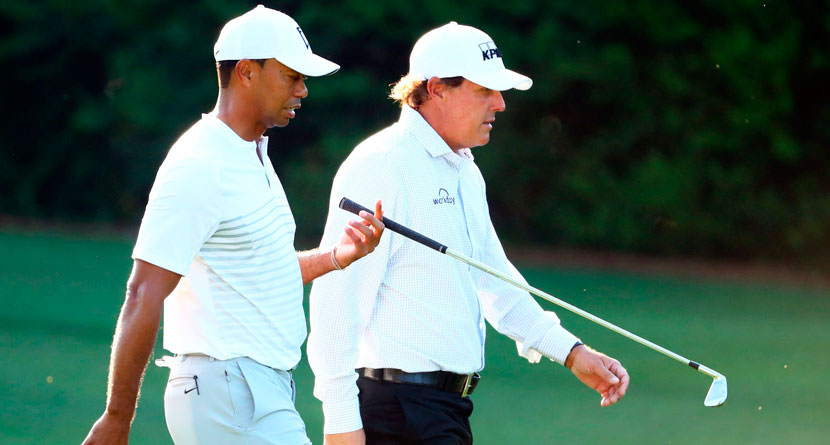 Tiger Woods’ return to professional golf has had an impact both on and off the golf course as well as in the minds of the hardcore golf fans and those who consider themselves only casual fans of the sport. Perhaps in a harbinger of sorts, golf was among the most well-represented sports in the recently-released ESPN “World Fame 100.”

As far as the biggest sports in America goes, golf’s eight athletes on the list were more than the MLB (0), NHL (0) and NFL (7) combined. Of the Big Four sports in America, golf’s biggest stars were only outflanked by professional football players.


The third annual “World Fame 100” was released on Tuesday with Woods and Phil Mickelson cracking the top-10. Woods, the 14-time major champion, ranked highest at No. 6.

The World Fame 100 is named from a pool of 600 worldwide athletes whose search score (a secret Google trend score), estimated endorsement dollars and social media following bore out the 100 most famous athletes in the world. Now, with his health seemingly in good shape and his game rounding into form for the meat of the PGA Tour schedule, Woods is ascending back up the list again despite being one of the oldest athletes on the list.

One athlete Woods is younger than is 47-year-old Phil Mickelson. Lefty ranked 10th on the list in popularity despite featuring a whopping “0” on social media following. Rory McIlroy, No. 15, and Jordan Spieth, No.16, are proving to be what golf fans have already known for years: the future of the game. McIlroy enjoys $35 million in endorsements each year, primarily made up by his deals with Nike and TaylorMade while Spieth’s $32 million in endorsements is buoyed by a search score 14 points higher than McIlroy’s.

Kevin Durant is on the cover of ESPN the Magazine’s World Fame 100 issue … and between basketball and business, his fame continues to grow. https://t.co/S78ofSRbvR pic.twitter.com/HVVGX7RQWp