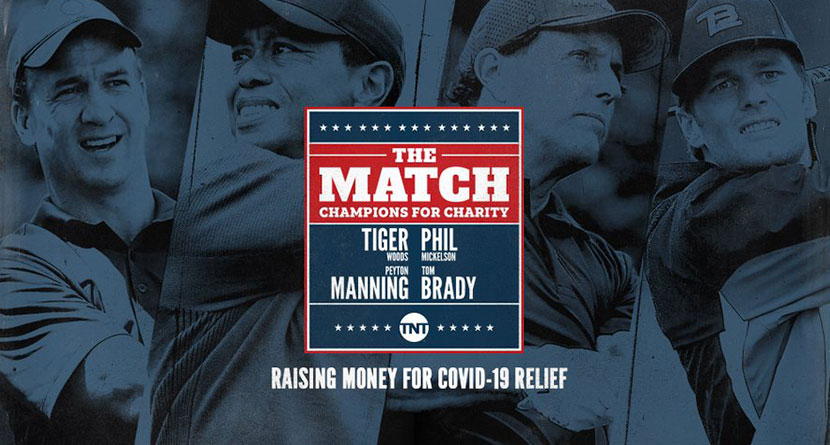 The much-rumored and highly-anticipated (by some) rematch between Tiger Woods and Phil Mickelson is officially a go.

“The Match: Champions for Charity” will pit Woods and future Pro Football Hall of Famer Peyton Manning against Mickelson and current Tampa Bay Buccaneers quarterback Tom Brady in a two-on-two live golf competition with all donations and fundraising to benefit COVID-19 relief.

“Turner Sports has confirmed the event will air live on TNT,” Bleacher Report’s announcement said. “Tournament organizers are currently working with state and local government and public health officials on competition and production logistics to ensure the event follows safety and health protocols.”

While a date and venue have yet to be officially confirmed, The Action Network’s Darren Rovell reported that Sunday, May 24 is a likely date and it is expected to be contested in South Florida.

The Match: Champions for Charity is coming soon exclusively on TNT. All proceeds will benefit COVID-19 relief ⛳️https://t.co/yJFIflsCht pic.twitter.com/OQcwiPTHCw

“There was talks about doing it all along anyway,” Manning told 104.3 The Fan in Denver on Wednesday before the official announcement, according to ESPN.com’s Bob Harig. “And now, to have a chance to have a major fundraising event for COVID-19 relief, almost like a telethon if you will … If that can take place, I’m all-in for that.”

“The Match: Champions for Charity” is the third installment of a made-for-TV event that Woods and Mickelson have spearheaded over the past three years. In November 2018, Woods and Mickelson squared off in “The Match,” an 18-hole, winner-take-all $9 million match that was won by Mickelson.

And last year, Woods, along with Rory McIlroy, Jason Day and Hideki Matsuyama, took part in “The Challenge: Japan Skins.”

After feeling the sting of defeat the first time around, Looks like @TigerWoods is bringing a ringer to The Match (#PeytonManning).

“After feeling the sting of defeat the first time around, Looks like Tiger is bringing a ringer to The Match (#PeytonManning),” Mickelson tweeted. “I’m bringing a goat.

As PGA Tour members, some small obstacles still need to be cleared as the Tour hasn’t granted Woods and Mickelson their official release to hold the event.

Woods and Mickelson would need to receive a “release form for them to play a televised or streamed event in the U.S.” a Tour official told The Action Network’s Jason Sobel. “We are still in discussions on a number of items, including ensuring the health and safety for all involved with the event.”

Naturally, Las Vegas has already released some potential odds on the action with Woods and Manning as the betting favorites.

if this 18 hole match is played, @SuperBookUSA would have

Further details will be laid out in the coming days and weeks, but the invested parties are staying mum on specifics.

“I wish I could say more, other than four Hall of Famers competing and creating tremendous value and awareness to help others in need for this all-in charity event,” Mickelson’s agent, Steve Loy, told ESPN.com.