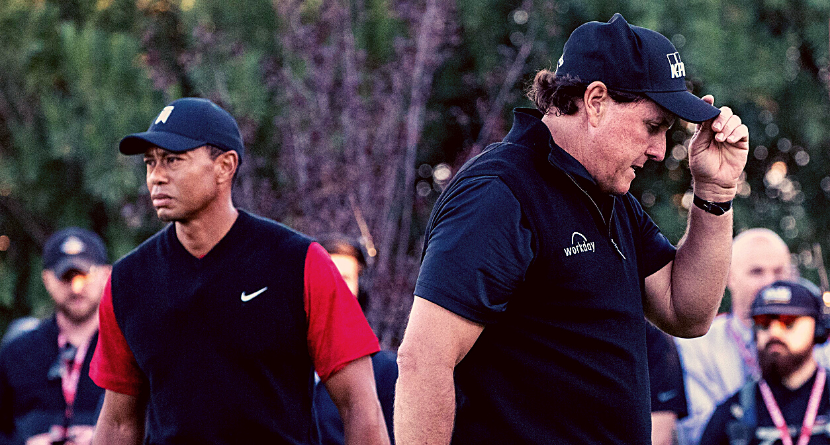 Tiger Woods on Tuesday said he hasn’t tried to make contact with Phil Mickelson amid an extended hiatus from professional golf.

Speaking at a press conference ahead of this week’s PGA Championship — where a 50-year-old Mickelson made history last year as the oldest men’s major champion — Woods acknowledged the absence of his longtime rival was unfortunate for the event but stopped short of expressing much sympathy.

“He has his opinion on where he sees the game of golf going,” Woods said. “I have my viewpoint how I see the game of golf. I’ve supported the Tour and my foundation has run events on the Tour for a number of years. I just think that what Jack [Nicklaus] and Arnold [Palmer] have done in starting the Tour, breaking away from the PGA of America and creating our tour in 1968 … I just think there’s a legacy to that. I’ve been playing out here for a couple of decades and I think there’s a legacy do it. I still think that the Tour has so much to offer, so much opportunity.

The business-like comments from Woods aren’t necessarily surprising; he has repeatedly professed his allegiance to the PGA Tour dating back to the first time Mickelson publicly aligned himself with the Saudi-backed startup circuit now known as the LIV Golf Series.

The once-frosty relationship between Woods and Mickelson had warmed some in recent years, perhaps as a result of their maturity into elder statesmen with a generation of talented newcomers nipping at their heels. There’s also the little matter of their positioning as friendly foes in a lucrative series of televised dream matches.

Woods did acknowledge that social media has the power to drastically sway public sentiment in ways unforeseen during a bygone era of traditional media, echoing the comments of some of his Tour peers in a recent ESPN.com article. But given the nature of his comments, along with the revelation that there’s been no communication between him and Mickelson over these past few months, it’s fair to wonder if the truce has been torn up.

“Phil has said some things that I think a lot of us who are committed to the Tour and committed to the legacy of the Tour have pushed back against,” Woods said. “He has taken some personal time and we all understand that. I think that some of his views on how the Tour could be run, should be run, there has been a lot of disagreement there. But as we all know, as a professional, we miss him being out here.”

The 15-time major champion has been paired with Rory McIlroy and Jordan Spieth for Thursday and Friday at Southern Hills, perhaps the most accomplished group ever assembled with 22 majors between them. The trio tees off at 9:11 a.m. EST Thursday and 2:36 p.m. EST on Friday.