Tiger Hints At Being Presidents Cup Playing Captain In Blog 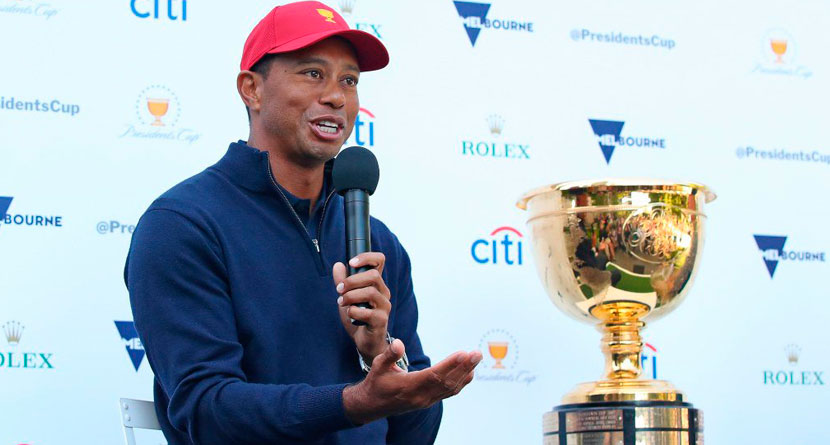 The PGA Tour began its 2019-2020 season on Thursday at A Military Tribute at The Greenbrier, and there are a handful of guys teeing it up over the next two months in search of one of the four captain’s picks for December’s Presidents Cup, which will be captained by Tiger Woods.

Captain Woods, however, may have tipped his hand on Thursday as it relates to who at least one of his selections will be when it is made official during the week of November 4th.

In a Captain’s Blog for PresidentsCup.com, Woods signed off in a particularly interesting way, writing “Till next time. Tiger Woods. U.S. Team Playing Captain.”

“While I was disappointed not to earn one of the 8 spots, I’m hoping to perform well at my next start in Japan [the Zozo Championship, Oct. 24-27],” Woods wrote. “I’m going to rely on playing with some of the guys in Florida to stay sharp. I’ll practice hard, work on my game, and we’ll have some matches. It’s a lot of work, but it’s also always fun.

“At the end of the day, the decision of who rounds out this team will ultimately be my call, but I’m going to lean heavily on the opinions of my captain’s assistants and the eight guys who have already earned a spot. My plan is to keep an open line of communication to ensure we find the four guys who best fit this team.”

The piece itself was the fourth installment of Woods’ Captain’s Blog for the site, but the first since July 12, which many took as a step in the right direction for those hoping to see Woods not only manning a golf cart and earpiece but his clubs as well at Royal Melbourne.

“My job as the captain is to put together the best team possible and try and put together the best 12 guys,” Woods said on a teleconference last month. “That’s what I’m trying to do. We’ll be going through the whole process of having open communication with our top eight guys and my vice-captains.

“That is something that we will certainly talk about, whether I should play or not play. Ultimately it’s going to be my call whether I do play or not as the captain. But I want to have all of their opinions before that decision is made.”

Woods’ use of “Playing Captain” in his sign-off was enough to get more than a few people excited about the proposition.

Um, not sure how I missed this yesterday. Tiger wrote a Prez Cup captain’s blog for the PGA Tour’s website and this is how he signed off…. ?https://t.co/Cr1XvOKA9G pic.twitter.com/91b7teu0uh

To the overall point of the blog, Woods expressed his excitement for the team to play sandbelt golf as well as getting a deeper look at potential captain’s picks in the coming weeks and months.

In particular, he singled out players like Rickie Fowler, Tony Finau, Phil Mickelson, Patrick Reed, Gary Woodland, Jordan Spieth, Matthew Wolff and Colin Morikawa as those he would be keeping a close eye on this fall.