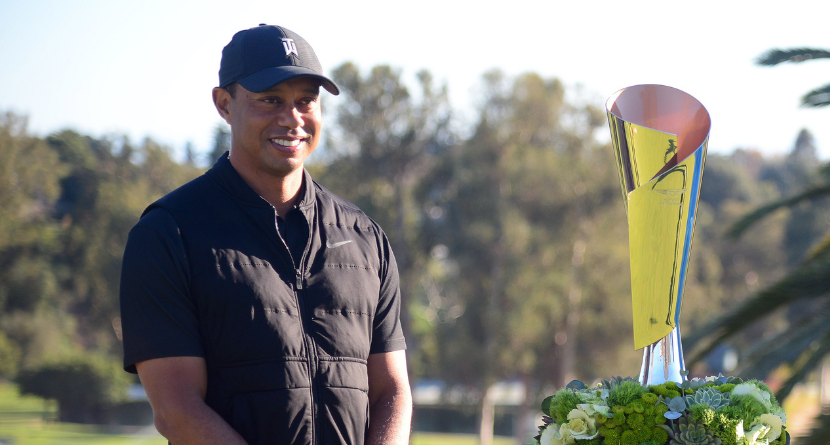 When will Tiger Woods play competitive golf again? Your guess is as good as his.

On the eve of the Genesis Invitational, with the one-year anniversary of his single-car crash in Southern California fast approaching, Woods — who was appearing at a press conference Wednesday as part of his hosting duties — was once again loath to put a timetable on a comeback.

Sitting alongside Aaron Beverly, the recipient of the Charlie Sifford Memorial exemption, Woods fielded questions for about 35 minutes, touching on topics ranging from the iconic venue (Riviera Country Club) to his relationship with Sifford to the PGA Tour media rights issue that set off a Phil Mickelson tirade. More than anything, though, the assembled media wanted answers on Woods’ health and the state of his game — and it’s clear he’s still efforting those answers himself.

“I wish I could tell you when I’m playing again — I want to know,’’ Woods said. “But I don’t. My golf activity has been very limited. I can chip and putt really well. And hit short irons very well. But I haven’t done any long stuff seriously.

Woods said he was capable of walking the par 3 course at Augusta National Golf Club but was by no means committing to an appearance at the Masters in April. Pressed for a more definitive outlook on his playing status, Wood provided a glimmer of optimism.

Here are some other highlights:

There was some good banter throughout the press conference between Woods and Beverly, who were dressed in similar outfits. In a touching moment, Beverly was asked for his earliest memory of watching Woods play. He said he remembers seeing his father break down in tears watching the 1997 Masters when Beverly was just 3 years old. Beverly, 27, was able to watch Woods win the 2019 Masters with his father before Ron Beverly passed away due to an illness later that year at age 72. “There’s probably nobody who understands that better than Mr. Woods,” Beverly said.