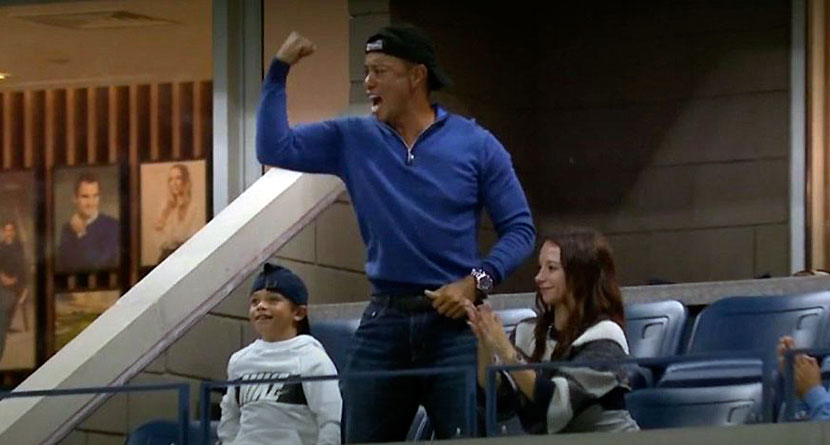 Tiger Woods’ recent surgery on his left knee didn’t seem to be bothering him too much on Labor Day as the 15-time major champion jetted to New York City to watch 18-time grand slam champion Rafael Nadal play in the U.S. Open Round of 16.

During Nadal’s four-set victory over Croatia’s Marin Čilić, Woods was seemingly on camera as much as either competitor living and dying with every point.

Flanked by his son, Charlie, his girlfriend, Erica Herman, and his daughter, Sam, Woods featured heavily during Nadal’s come-from-behind win.

Afterward, Tiger was the topic of conversation among Nadal and ESPN’s Tom Rinaldi on the court.

“For me, it’s a huge honor playing in front of all of you of course,” Nadal said. “But playing in front of Tiger for me is a very special thing. I always said I never had big idols, but if I had to say one, one idol is him. I always tried to follow him every single shot that he hit during the whole year.

“For me, it’s a big pleasure to have him here supporting. Means a lot. He’s a big legend of the sport, one of the greatest sportsmen of all time. I just want to congratulate him for one of the more amazing comebacks in sport, winning the Masters this year.”

“I always say that I’ve never had big idols, but if I have to say one idol it’s him.”

—Rafael Nadal on playing in front of Tiger Woods pic.twitter.com/rqaObYFzD2

Nadal, who is a big golfer when he’s not on the court, said he and Woods had never played together, and joked that’s a good thing for Tiger’s sake.

“Honestly, it’s much better if Tiger doesn’t see my swing,” Nadal said. “Maybe he can lose a little bit of rhythm after that.”

Up next for Nadal is a quarterfinal match against Diego Schwartzman on Wednesday. For Woods, he’s slated to play in an exhibition in Japan in seven weeks and then compete in the PGA Tour’s Zozo Championship. After that, he will have another month off before the Hero World Challenge and then definitely-captaining, potentially-playing in the Presidents Cup.