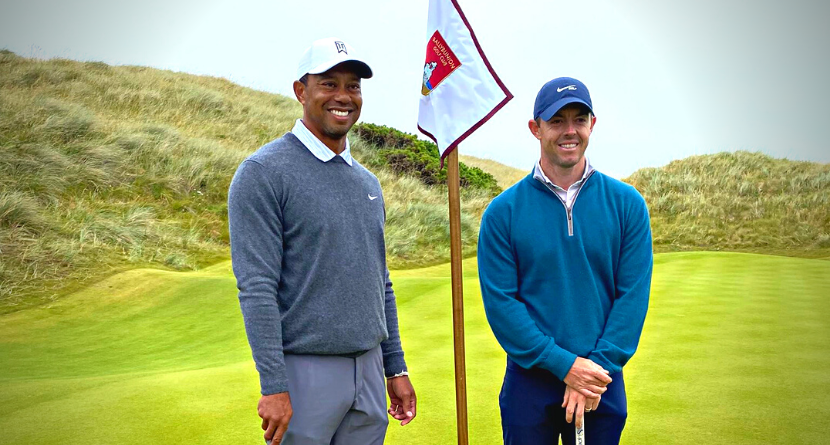 On Tuesday, Tiger Woods was in the mood to reflect on the journey that will soon bring him back to the birthplace of golf — as unlikely a destination as anyone could have predicted when the 15-time major champion tumbled down that ravine in Southern California just 16 months ago.

Two days later, it was time to get back to work. And he had a friend to keep him company on the grind.

Woods was spotted with Rory McIlroy Thursday at Ballybunion Golf Club, getting in another tune-up ahead of next week’s Open Championship at St. Andrews. The century-old, links-style course, situated in County Kerry, offered a more comparable test than the JP McManus Pro-Am at Adare Manor earlier this week.

Speaking to reporters at the star-studded Irish exhibition on Tuesday, Woods discussed the unlikely path he forged to put himself in this position.

“The plan was to play the U.S. Open, but physically I was not able to do that,” Woods said. “There’s no way physically I could have done that. I had some issues with my leg and it would have put this tournament [The Open Championship] in jeopardy and so there’s no reason to do that.”

Indeed, the 150th Open Championship at St. Andrews — where Woods hoisted two of his three Claret Jugs — was always a priority in whatever abbreviated schedule he could reasonably muster. He told us so in April, right after making the cut at the Masters with little more than guts and guile.

Still, saying and doing are two very different things. And as recently as the fall of 2021, the notion that Woods could start in three of the four majors wasn’t being seriously entertained.

“If you asked me last year whether I would play golf again, all of my surgeons would have said no,” Woods said. “But here I am playing [three] major championships this year.

Days like Thursday, during which McIlroy and Woods posed for an endless stream of photos and had their every move tracked on Twitter, is the reward for all the grueling rehab it took for the 46-year-old to be standing on his own two feet again.

“It’s been worth it. It’s been hard,” Woods said. “I’ve had some very difficult days and some days which moving off the couch is a hell of a task, and that’s just the way it is.

“I have my own two legs, which I tell you, I’m not going to take it for granted anymore, some people do. But people who have come close or lost a limb understand what I’m saying, but you have difficult days and also you have great days.”