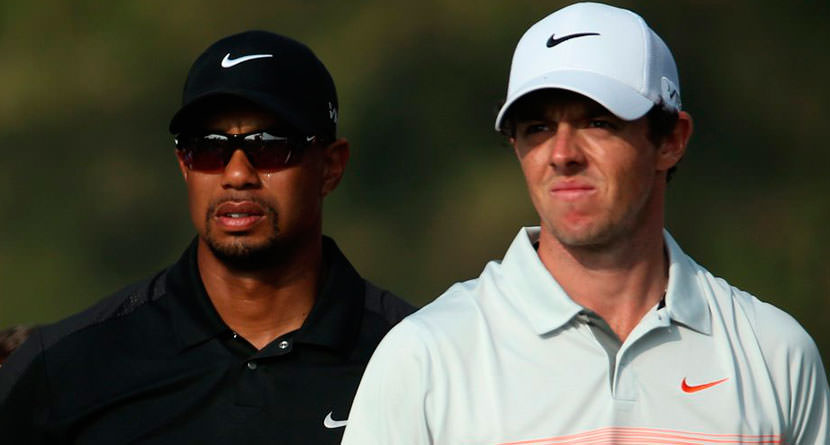 Tiger Woods’ bouts with insomnia have been well documented over the years, but how has he been dealing with his affliction lately? By texting Rory McIlroy in the middle of the night. Apparently, Tiger’s texting habits are causing a stir with Rory’s fiancée Erica Stoll, who doesn’t take kindly to Woods’ proclivity for a late-night/early-morning conversation with her man.

Sitting down for an all-encompassing interview with the Irish Independent‘s Paul Kimmage, Rory talked about his relationship with his boyhood idol and how it has transformed over the years, culminating in some texts coming through at weird hours.

PK: Go back to Tiger, because he’s interesting on so many levels. You’ve spent time with him?

PK: How close did you get?

RM: Close enough that we could tell each other things that you would only tell your friends, so pretty close.

RM: I’m drawn to him, yeah. He’s an intriguing character because you could spend two hours in his company and see four different sides to him. When he’s comfortable and he trusts you — and his trust (sensitivity) is way (higher) than mine — he’s great. He’s thoughtful. He’s smart. He reads. He can’t sleep so that’s all he does — he reads stuff and educates himself on everything. But he struggles to sleep, which I think is an effect of overtraining, so I tell him to calm down sometimes. He’d be texting me at four o’clock in the morning: ‘Up lifting. What are you doing?’

RM: Erica actually got pissed off with it. He was texting me in the middle of the night and I was like, ‘Tiger is in the gym’.

RM: And he’s so competitive. I remember being out to dinner with him in New York after this thing we had done for Nike. It was September ’14 but obviously the Masters was (on his radar) and he says: ‘I’m not going to let you win that slam.’ I said: ‘You’re not going to beat me.’ So we had this back-and-forth about some of the guys he’s beaten to win Majors and I said: ‘You’ve never had to face someone like me.’ So there’s a competitiveness there, but I feel like he respects me.

Tiger sending Rory, “you up?” texts at 4am is the best thing ever. What a psycho. pic.twitter.com/al8B4RZPEc

The whole interview is worth a read, and part two of the sit down will be released next week.