How TaylorMade’s Hilarious Holiday Card Came To Be 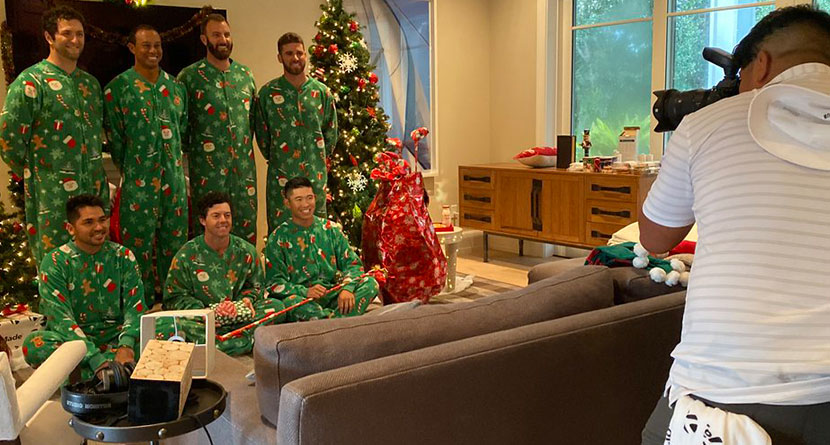 The holiday season brings traditions that come and go. One that has stood the test of time, however, is the holiday greeting card.

Whether it be a season-in-review brochure or a simple well-wishing photo collage, the holiday card has many iterations that, until this year, rarely featured anything golf-related.

That changed this year thanks to TaylorMade Golf’s content manager Tyler Brett. As reported by Golf.com’s Sean Zak, Brett had an idea for a Team TaylorMade holiday card over a year and a half ago, but requiring an authentic photo opportunity and battling time constraints resulted in the eventual masterpiece being delayed.


To get the likes of Tiger Woods, Rory McIlroy, Dustin Johnson, Jason Day, Jon Rahm, Matthew Wolff and Collin Morikawa in the same room is no small task, so Brett hatched a plan to make it happen during an annual gathering of Team TaylorMade in the fall of 2018.

Some people will say that the @TaylorMadeGolf Christmas card was created in PhotoShop. It wasn’t. When the players were assembled it was the first thing photographed in the morning. pic.twitter.com/eEyEA76M2Z

With the players congregating to see new equipment and film promotional materials for the following year, Brett planned to have the players wear customized pajamas for a staged photo that would serve as the company’s holiday card. Given the day’s packed agenda and the card’s low priority, it was one of the first things nixed when something ran long.

“When we didn’t get to do it,” Brett told Zak. “I was like, ‘Just our luck. Someone else is going to do this. Steal our idea. Steal our thunder.’ But fortunately that didn’t happen.”

When the 2019 gathering occurred last month, Brett was ready to go. Having ordered multiple sizes and rehearsed the poses and setups, Brett had his holiday card as the first order of business. Arriving at 6 a.m., the players had breakfast and then changed into their matching onesie pajamas.

“If we did this at the very end of the day, I don’t know how big the smiles would be,” Brett said. “I think the entire time they were just in disbelief. But as you can see, they had a lot of fun with it. They embraced it.”

What resulted was incredible: seven of the best golfers on the planet wearing matching holiday onesie pajamas. If that doesn’t make you smile this holiday season, what will?